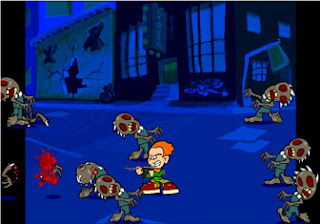 There seems to be a load of games covering different genres all involving a ginger haired kid named Pico.  I played one called something like Pico at School which involved a group of murderous Goths butchering his school.  That was a really short, yet fun point and click game.  Resident Pico is a mouse controlled single screen shooter.

The game starts with a girl informing Pico that there is a zombie invasion.  Pico offers to protect the girl, but she says she would rather take her chances, and then runs off.  Soon after zombies enter the screen from left and right and the madness begins.

You move Pico via mouse, where ever the mouse goes Pico goes.  Holding down the mouse button fires Picos machine gun.  Zombies enter from left and right.  All look an identical grey colour and all die in the same way, they fall to the floor with their intestines being puked up.  After a while a hulking giant zombie shows up, he struts menacingly towards Pico wherever you go.  After a lot of shooting the uber zombie explodes.  Pico starts break dancing and that's that.

A very short game, looks great, but is quite boring, and not at all challenging.