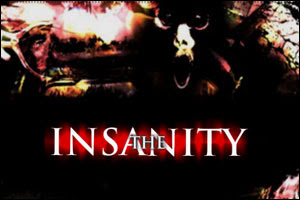 I kinda played these games out of order, having done the second game in the series yesterday I decided to seek out the first.  The game is quite similar to The Insanity II, though not as good, or interesting, and also a lot shorter.  Again the game is a static screen point and click.

You wake up in a box with no memory of how you got there, or who you are.  Breaking out the box you find that you are in some nightmare house populated by animal headed mutants.  By speaking to some of less violent monsters you learn that the house is owned by a mad genius Dr Friendly, and that the only way to get out of the place is via a secret door in the basement.  With hammer in hand you head out to escape.

The game is a lot simpler, and easier than it's sequel.  There is only one file to read, only a few puzzles, and all the combat is done in the same way.  When you encounter a violent mutant you have to attack by clicking on red hit boxes that appear around the fight screen.  You must hit a certain amount of hit boxes before the time limit runs out.  Very simple, but later fights sees the hit box much smaller.  There is no real story of note to this game, with little explanation for anything. The game is creepy, and Saw like again, and not a pleasant experience due to the sense of depressing dread surrounding the whole thing.  It is kinda interesting that all the characters here appear in the sequel, but operate in a different universe; having no connection at all other than similarities in names.

The game is around 20 minutes long, and can be found easily enough by searching on Google.  Not bad, but the kind of mood I am in was not ideal.  I really need something bright and cheerful to play.

Hey man, have you played the second chapter? Is way better than the first one....here is a link Insanity 2nd Chapter