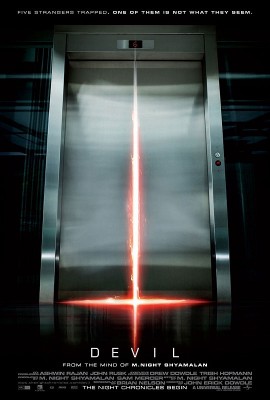 Devil is yet another film by M.Night Shyamalan, he co-wrote the script, as well as produced the film.  It is yet another horror, and again it has a twist to it (of a kind). It does feel similar to his other works.

Devil is set in an office building in the middle of a bustling City.  Five apparent strangers all get into a lift.  The five people include a security guard, salesman, rich lady, middle aged woman, and a scruffy looking ex military man.  Soon after the lift starts it promptly breaks down. This is the least of the occupants worries though, as bizarrely people start getting killed off one by one. Yet despite security guards, and Police monitoring the lifts security camera, and despite the cramped conditions of the lift itself it is not apparent which of the five are the killer due to convenient power cuts that plunge the place into darkness for minutes at a time. One of the guards monitoring the situation comes up with the idea that what is happening is a 'Devils Meeting'; a scenario where guilty strangers are brought together in one location, and then tortured and killed by the Devil in human disguise. As events unfold it is revealed that each and every person in the lift has dark secrets, and have many enemies who would wish them harm. Could it be that was is happening is actually a real Devils Meeting? 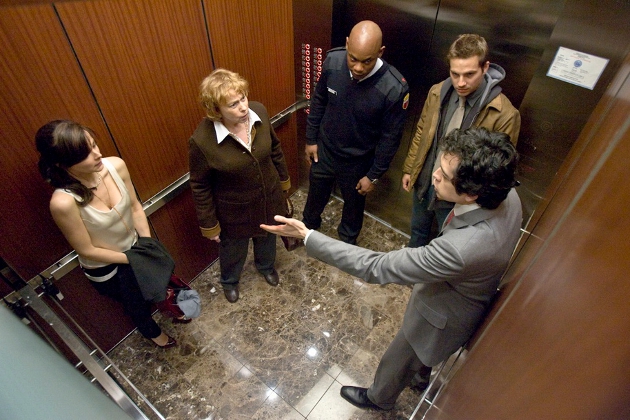 Shyamalan manages to spin this simple tale into a hour and a half.  The premise is interesting, and there is a real chill factor due to knowing one of the five people trapped in the lift is actually a murderer. The scariest moments of the film are when the lifts power goes out, as this usually results in another death. The characters come to really fear the dark. Violence happens in the darkness, for example; one character gets a shard of glass jammed through their neck, another is hung, while yet another has their head completely twisted around. To go with this tale there is a sub plot involving a depressed detective investigating a suicide. He gradually gets caught up in the events of the lift.

There is not a lot of mystery surrounding the plot (other than who the killer is).  There is some effort to make the viewer question if the events are actually a supernatural event, or if there is a more human explanation.  Each of the peoples backgrounds are revealed during the film.  Each person has done terrible things in their lives, and so give motive for them being killed. To be honest though there is never really any real doubt due to demonic images turning up on the surveillance footage of the lift, as well as a voice over throughout the film which tells of a fable the narrators mother told him as a child of a Devils Meeting. 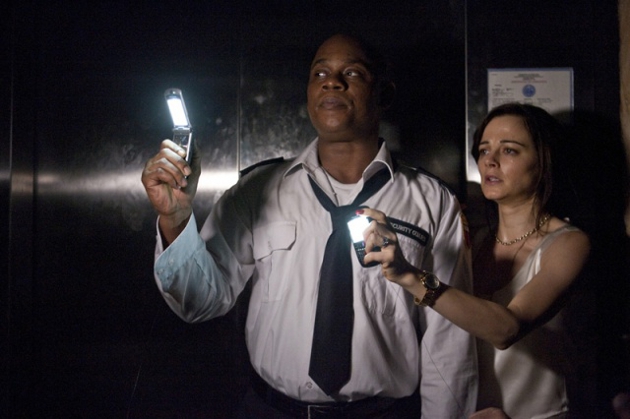 The film is really quite creepy, and had me tearing up a bit towards the end.  One of the last scenes when it is just the final survivor trapped in the titchy lift with the Devil is almost too much. Just thinking about that situation sent chills down my spine. There are quite a few violent deaths in the film, but due to the nature of the deaths they are done in pitch black, so only the aftermaths of the killings are shown. As well as the victims in the lift there are also quite a few other characters who end up dead as a result of their efforts to stop the Devils Meeting from resolving. The plot ends quite well with all the loose ties tied up. The film does have a similar feel, and resolution to many of Shyamalans other films.

Well worth a watch, the film shouldn't have enough material to carry it for the length of a normal film, but didn't feel padded out.  Quite creepy, though I don't know if that come from the fact that I was watching it in a big Cinema totally alone at night.