My life has taken a turn for the horrendous, real life horror sucks.  I intend to try to get the energy to throw myself into my job (my blog, not my soon to be ended wage earner) so expect to see lots of posts. The Breach is a free to play flash game that can be found at Kongregate Games.  Made by Berserk Studios it is a Sci-Fi Horror that has many similarities to Metroid, Doom 3, and Dead Space.

You play as Sergei, an Engineer who has headed to The Hermes; a Space Hulk that has had contact lost with it.  The Hermes had an experimental warp drive that could drastically reduce the time it takes to travel through space.  It does this by warping to different dimensions other than our own, before warping back, cutting journeys down.  Sergei finds the ship deserted, with power out on many levels.  He soon discovers a corpse that suddenly comes to life; a zombie!  Having had his entrance blocked off, Sergei decides to head deep into the ship, not only to find an escape, but also to find out what has happened.  Crippling headaches complete with horrific visions of an Alien world reveal that the dimension jumping Space Hulk travelled to a dimension of evil yellow insectoid Aliens, who have slowly possessed the crew, and brain washed them. 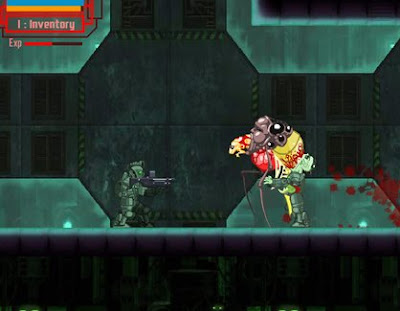 The game is a lot of fun to play.  It is a 2D platformer in a Metroidvania style.  Large levels complete with platforms, locked doors, key cards, and weapon upgrades.  Sergei gains experience as he kills, leading to him levelling up which improves his health, shields, and weapon damage.  Logs give background to the crews plight, in many ways echoing the story of Dead Space, while the whole dimension jumping aspect brings to mind the plot of the under rated Doom 3.  The game like Dead Space is split into levels.  There are around 6 areas, ranging from Crew Quarters, to the Engine Room, and Medical Labs.  Each level ends with a boss fight introduced via a charming flash cartoon intro.

There are a wide variety of enemies that share many many similarities with Dead Space.  The most basic are the zombies; crew members turned into vegetables by the Yellow Evil.  Hanging from walls, and ceilings are mutated crew members, these vomit yellow energy balls at you. A lot of the enemies are insectoid in nature, from flying yellow butterflies, to spiders that comprise of a human head with legs, as well as floating exploding bugs, and hulking bull like things.  Most can be killed quite easily, especially with the generous levelling up system.  The bosses are all unique, mostly comprising of some completely mutated monstrosity, such as a floating blob that flings out tentacles at you, a giant shape attached to a wall with a crew member erupting out of it, as well as the Yellow Evil itself. 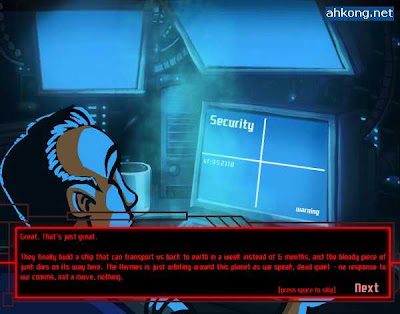 The game is very easy, it took me around 45 minutes to get through, and only died once (not including the end boss).  The game is controlled via the arrow keys on the keyboard, with Space used to fire your gun, and read logs.  For such a short game there is quite a lot of plot pushed through.  Sergei frequently has internal monologues, and dream like sequences sees him interacting with some of the doomed crew.  The music is very atmospheric, and creates a real feeling of fear to the game.  There are no sound effects which is a bit of a shame. 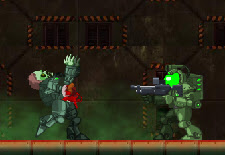 I really enjoyed this.  It looks great, sounds great, and while very short and easy is fun to play while it lasts.  Plus, it is free.

Posted by Daniel Simmonds at 04:21