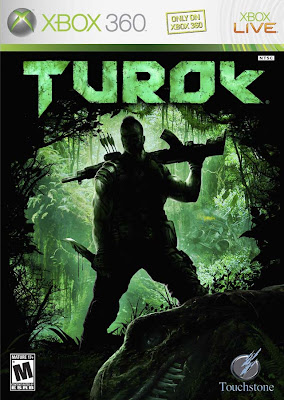 Turok has never been a favourite of mine, the N64 Turok 2 was ok, but basic things such as completely broken sniper rifle controls led to frustration.  The current gen release sees a reboot for the franchise.  Again it features lots and lots of Dinosaurs, and again you are cost as the titular character Turok, but this version features much more human combatants.

The game sees you as Turok on a spaceship with a load of Marines.  You are heading to a Planet where a big terrorist is supposed to be hiding out.  Turok is an outsider with the Marines, as he used to be one of the terrorists biggest students until his conscience got in the way.  Approaching the Planet a massive missile hits the spacecraft.  The craft splits into chunks, landing all over the surface of the Jungle Planet.  You need to relocate the disbanded Marines, as well as stop the terrorist leader, all the while putting up with the horrific bullying of your 'team mates'. 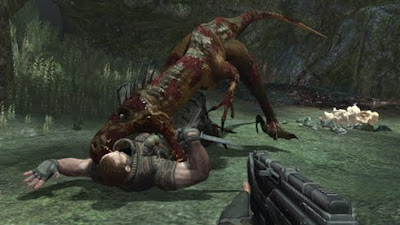 Turok is a first person shooter (FPS). The game is quite terrible, worse than average for sure.  Dinosaurs are annoying to fight, though a instant kill can be activated if you have your knife equipped.  The larger Dinosaurs constantly knock you off your feet onto your back.  Repeatedly they do this.  You are vulnerable to attack while you are stuck in the 3 second falling over animation, and if you happen to be running (well walking) away from the enemy, then you instantly face it, so that when you stand up you have to clumsily turn round again. Very annoying.  The human soldiers for the most part are ok to defeat, they don't show too much intelligence, though they do hide round walls.

There is no run button, the pace you move at is insanely slow, weapons have small clips, and a lot of them (such as the shotgun) just feel totally useless.  When you take damage the screen turns red to indicate this.  However, the screen turns very, very red, so red that you can't actually tell what the heck is going on, so end up accidentally walking into walls, and into enemies as you struggle to make out where exactly you are. 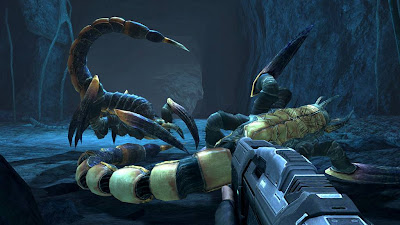 So far, so bad.  The game is slightly redeemed by one particular level.  You assault an enemy base when ground tremors erupt.  Out of the ground come giant scorpions.  After tense fights via fixed gun emplacements the whole area collapses.  The next section sees you in a vast underground network of caverns, and tunnels, infested with the giant scorpions.  You; armed with a flamethrower have to carefully make your way through the lair.  The darkness, and constant attack makes this level really tense, and exciting compared to the dreadfulness of most the game.  The section ends with a giant Leviathan style boss that breaths fire, and hurls rocks at you with it's many tentacles.  This horror section really made the game better than 100% awful. 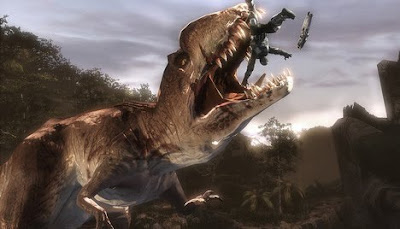 The game really sucks, it really is not much fun at all.  The Dinosaurs are scrappy to fight, and never scary.  The Scorpion lair level is the games sole redeeming feature, as everything from the multi player orientated achievements, to the hateful A.I Marines leads to pure misery.  Not worth picking up, the horror level cannot make this a purchase worth doing.

Posted by Daniel Simmonds at 12:34