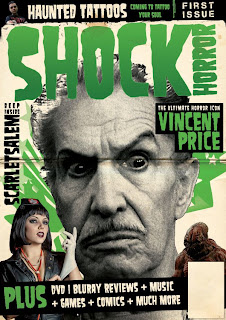 Towards the end of last year the great British Horror Magazine 'Darkside' died.  Getting on for 5 years I brought that great mag.  It wasn't perfect; the smell of the pages made me feel ill, and the magazine focussed far too much on talking on and on about dreadful Italian Giallo films that have nothing to do with horror at all, as well as being really bland.  The magazine had a large readership, but despite this, and the large number of ads it had, the mag could not afford to keep going.

I learnt from my Girlfriend that an old friend of a friend; Dean Boor was going to release his own horror magazine.  I tracked down his website and promptly brought an issue.  I admit I mainly brought this out of curiosity to see what type of magazine he would create, I also brought it as I have yet to find a decent horror mag after the demise of Allan Bryce's Darkside.

I was expecting a flimsy magazine with wafer thin pages, like a supplemental mag in a newspaper, instead I got a lovely solid magazine with really thick pages.  The mag is built to last! The layout for the most part was good, well designed with the exception of one page that was laid out horizontally rather than vertically which seemed odd.  It was also nice to see the return of a self indulgent staff page.  Back in the 90's it was all the rage for magazine writers to talk about themselves, it was nice to see this feature resurrected as it is always good to see whose opinions you are reading about.

Before I go any further I must say that when I read this mag I was in quite a bad mood, as such I was being more critical than I usually would.  The magazine starts off with an article on one of the horror greats Vincent Price.  The article is well written, though does feel as if it was written by a fan rather than someone trying to inform; something Dean readily admits to being.

The first main section of the mag is dedicated to Reviews.  The Film Reviews are interesting, and informative, a mix of old and newer films reviewed such as Re-animator, and Splinter.  The Comic Book Reviews are really good.  It is so hard to review comics, but these reviews really made me want to try out the comics mentioned.  There are two Videogame Reviews.  These are quite terrible unfortunately, due to a mix of spelling mistakes, factual errors, and the fact that the reviews read more like advertisements for the products rather than anything else.  If I was someone unfamiliar with videogames I would be no better informed after reading these than before, as basic information such as what the genre of the game reviewed is, is totally missing.  My main complaint with the Review section in general is a lack of paragraphs, just walls of text that led to me getting a bit lost at times.

The 2nd half of the mag is a lot better, and also a lot more interesting. An article on SFX is quite informative, and small sections on various topics such as products, tattoos, and a hilarious column by zombie survival expert Dr Dale of 'How to survive a zombie apocalypse' fame brings the mag to a nice close.  The interview with John Gulager (director of the Feast trilogy) is a real highlight, being quite entertaining.  I am defiantly going to check out the Feast films having read this (I think I actually own Feast on DVD, but just have not yet got around to watching it).

The magazine is well made, has large easy to read text, and is written in a pleasant style.  Though there are a lot of errors here and there it is to be expected in a first issue, with time I am sure this magazine will improve and improve.  My only worry is that in this age of the internet there is not a lot of call for print mags, a lot of people reckon print is dead.  Here's hoping that Dean Boor and his motley crew will keep up the fab work; the best horror mag I have read in a long long time!
Posted by Daniel Simmonds at 06:47