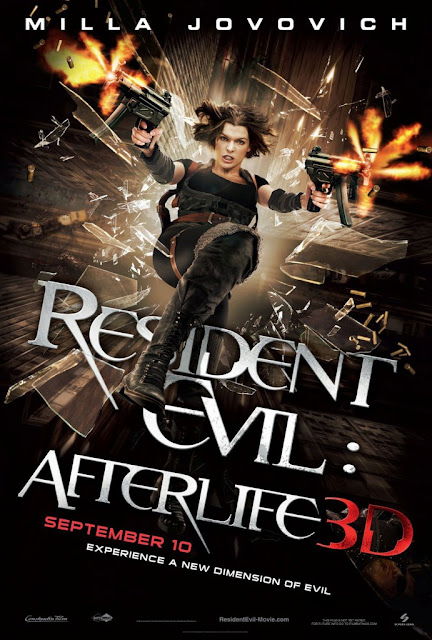 Resident Evil: Afterlife is the fourth entry in Paul Anderson's Resident Evil film series and is the second to be directed by him. Resident Evil was an amazing film, and is one of my all time faves.  Next was Resident Evil: Apocalypse. This was quite a bad film, redeemed by the fantastic Nemesis enemy, and some good action scenes. Third was Resident Evil: Extinction, I have only seen that one once, but thought it was fun enough. The films occur in a separate Universe to the video games, despite the original film technically being able to be fitted in. As such many characters from the video games appear.

The third film ended with Alice (Milla Jovavich) and a band of clones wanting to destroy the evil Umbrella Corporation once and for all. This they do in the opening sequence which leads to the destruction of Umbrella's Tokyo HQ, as well as the convenient death's of all the Alice clones. The original Alice survives, as does the CEO of Umbrella; a man known by the name of Albert Wesker (Shawn Roberts). Six months later and Alice is in Alaska searching for her friends (who headed there at the end of Extinction). She comes across Claire Redfield (Ali Larter) who is under mind control.  Together they locate a group of survivors in Los Angeles. They reveal that the place her friends are likely to be is a massive tanker which had been broadcasting a signal of hope up until recently.  But is the tanker the source of every ones salvation, or is there yet more...(resident) evil? 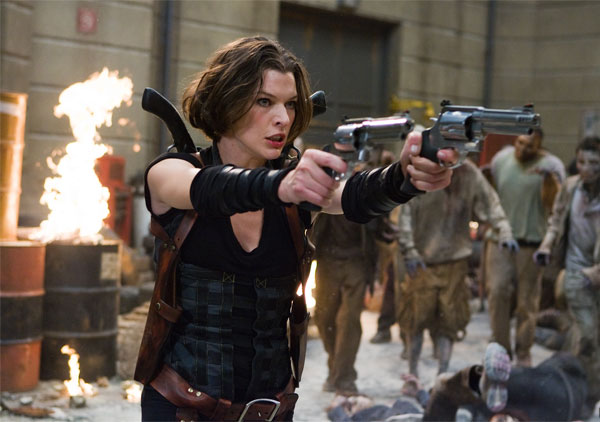 The film's budget increases with each episode. This; the fourth film has been made in 3D using the same camera technology that James Cameron used for Avatar.  ome of the 3D effects look fantastic.  The starting sequence of a rainy street in Tokyo is amazing; a birds eye view with individual raindrops falling into the screen. Many action sequences benefit from this 3D, whether it be a fight in a flooded room, a courageous leap off a rooftop followed by zombie hordes, or just Albert Wesker's amazing moves. Sometimes the 3D does make the characters seem 2D in comparison, but for the most part it doesn't ruin the experience.

The film again is only very loosely based on the games, this time around it is focused mostly on Resident Evil 5. Some zombies have the four tentacle type thing that comes out their mouths. Split dogs turn up (and are a real highlight, looking fantastic). The executioner enemy from the fifth game also shows up, though no explanation where he came from. Much like he does in the game, the executioner is gigantic, head covered by a sack, and nails driven through it's flesh. It carries a ginormous axe. The film is not really horror orientated at all.  Action all the way as is demonstrated by the very action heavy opening sequence. It never gets boring though. As is usually the case in the Resident Evil films there is a lot of fast travel (characters moving from one location to another off screen). 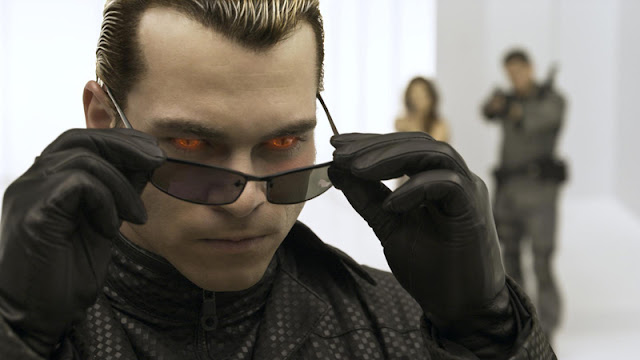 Wesker appeared briefly in Extinction, but here he is the main antagonist. In this timeline he is the apparent leader of the Umbrella Corporation. Wesker here is ultra cool, much like in the games.  he has T-Virus powers, and so much like in Resident Evil 5 he is able to move amazingly fast, and is very powerful. His fight with Claire and Chris Redfield is quite brief, but a highlight of the film. The human characters are quite terrible overall. The main ones do their job, but newer characters (such as Crystal) show up, get given a little bit of exposition to try and make them seem more than just cannon fodder, and then promptly get killed off. I don't see the point of trying to make the characters seem like proper people when they have so little screen time before they are gone.

The Umbrella logo is again plastered all through the film, I love that symbol. Zombies show up in large quantities, but for the most part just hang around in the background, with the exception of a fantastic action sequence at a prison. The split head dogs are real cool, but no lickers, or zombie crows this time around. 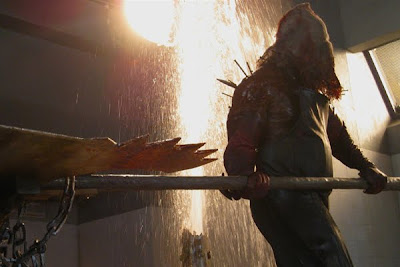 As is always the case, the film ends with a big cliffhanger, for a few seconds I did think that maybe this was it, but no, a big event happens that will no doubt lead to Resident Evil 5. Hopefully Wesker will return for that film, as he was a real cool character, but the amount of video game characters here now (Chris Redfield, Claire Redfield, Jill Valentine etc) is quite a lot, it doesn't help that they all act in the same fashion and don't stand out from each other, even less so here than how they are in the games. Milla is her usual self as Alice, a vehicle for action, but no actual personality.
I did enjoy the film, and had quite a cool soundtrack, but once again is not a patch on the original film.

This is a great entry in the series and while it was made with 3D moments in mind this is still an enjoyable watch in standard vision. The soundtrack brought to mind George Romero's Day of the Dead, and I found the sense of isolation Alice experiences to be something quite different in feel to the previous movies.
Posted by Daniel Simmonds at 14:11

I dont ever think they will be able to out do the original, but still really liked the movie. And thought the 3D was actually pretty good.
Really good and fair blog