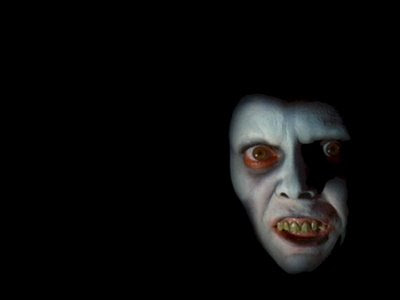 Had another Nightmare the other day, no zombies in this one, but a Demon; spooky!

I was working for the Military, I had been forced onto this Top Secret Project as otherwise I would be in Military Prison.  There was a hole dug into the ground, a metal runged ladder led down into a small earthen cave which had an ancient Temple room leading off it.  The Temple room had an evil presence in it, I could feel it as it rushed to get me.  I managed to climb up the ladder and escape. The Military wanted to harness the power of the evil spirit for their own ends.

Later on I somehow revealed the secrets of the room, I emerged from the ladder to find myself by a cliff by the sea, there was a big cave nearby which had thousands of birds flying around.  By the entrance to the cave was a human skeleton.  As I approached the skeleton the birds all flew out, they pecked me clean within seconds, removing all skin, muscles, and internals, leaving just a bleached skeleton.

The strange thing about this dream is that despite starring in it, I knew it was a 2 part TV special.  There had been 4 horror films about this evil spirit, each film revealing no answers and ending with all the characters killed off.  At the end of the first episode I fast forwarded the tape to get to the 2nd (why yes, I was watching this on VHS, and?)

Part 2 saw me on a cliff by the sea with my Sensai, a ancient Chinese man, complete with long wispy beard, and ornate robes.  He started acting strange, saying the evil spirit in the hole was all his plan.  He tries to kill me and I run.  On the edge of a cliff I look over to see the Sensai crawling crab like up the sheer cliff face. I realise that he is possessed by the Demon of the hole...

Can't recall the rest, so not exactly a hyper interesting dream, but still I saw this as fit for a blog post.
Posted by Daniel Simmonds at 01:06