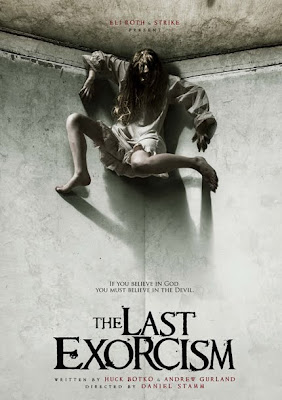 The film concerns a troubled Preacher named Cotton Marcus (played wonderfully by Patrick Fabian) who lost his faith in God after a Doctor saved his sick son, rather than the Lord.  Cotton is soon to give up his life's job, but first wants to try and do some good.  He sees the whole notion of religion as silly, but does understand the joy religion gives people.  After hearing about a exorcism that went wrong leading to a boys death, Cotton decides to get a documentary made exposing just how fake, and stupid exorcisms are in order to prevent any more deaths.  He travels with his film crew to a remote farm in Louisiana where a farmer believes that his 16 year daughter is possessed by a Demon.  Cotton agrees to carry out his final exorcism in the hope that the tricks he uses to do it will proof just how baseless exorcism actually is. Unfortunately things turn serious quite quickly.  Could it be that this time the possession is actually real? 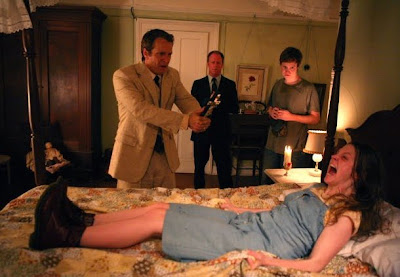 The film is shot as if it's a documentary.  Along with Cotton is a woman (Iris) who is narrating the documentary, and asking questions, as well as Daniel; the cameraman.  The film is very well edited together, almost as if it was a real life documentary, it features music to accentuate this feeling also.  The film falls into the genre of 'Found Footage' (think 'The Blair Witch Project', 'Quarantine', or 'The Last Broadcast').  At times it does feel quite similar to Blair Witch, but much more smoothly filmed, after all the Camera man Daniel is a professional.

The characters all seem believable, and flawed in their own ways.  Despite being a complete fake, Cotton comes across as a really likable guy rather than a fool.  He is funny, charismatic, and while he doesn't have much faith in his religion, he does recognise just how useful it is to people, and how he is able to put peoples minds at ease, and relax them.  He is also shown to genuinely care about people.  Long after things turn sour he stays to help the family he has found himself involved with (the Sweetzer family consisting of Louis, the Daughter Nell, and the Farmers sullen Son Caleb) rather than leave them to whatever issues he feels they have.  Louis; the father of the maybe possessed girl comes across as a really tragic figure.  He is an alcoholic after the loss of his Wife to cancer, and is tortured with his devout belief in God, and the protection of his two children. The character of Nell is another ace one, being able to convey both vulnerability, and shyness one second, and cold blooded psycho the next. 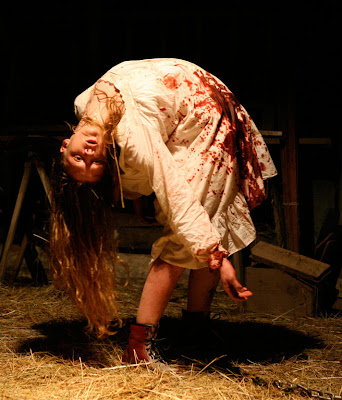 Being an Eli Roth film, I expected plenty of violence, and blood.  Surprisingly there was not much of either, only a few scenes worth.  When the blood arrived it was suitably large in scope; a cat being stabbed to pieces, and the aftermath of a knife to the face are the most bloody scenes.  The film seemed very realistic, though the films score takes you out of the illusion somewhat that it is a real documentary, specially as the ending just doesn't lend itself to the image of the documentary being properly finished off.

The film felt almost subdued by the end, a resolution to the tale, and I almost felt cheated by the events...then everything got totally shaken up.  The last 5 minutes of the film are completely messed up, like something from a fever dream.  It seems like a totally different film, as if both the gentle documentary, and this vision of utter madness had been coexisting.  The films last scene is more creepy, and terrifying than anything in the film, a total twist in direction for the films tone, and I am ashamed to say that by pandering to the horror fans they have made the film much higher in my estimations than it would have been sans ending.

A different twist to the usual generic tale of Demonic possession, and the documentary style is effectively done.  Worth a watch, just don't expect too much terror.

Posted by Daniel Simmonds at 06:01