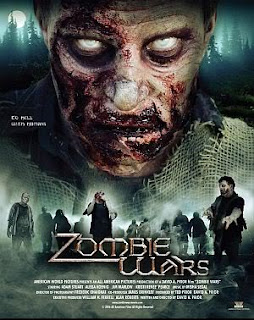 Had this film kicking around for a while, so thought I would give it a spin.  The film is a low budget zombie flick that uses CGI for a lot of it's effects.

The film takes place 50 years after an unknown factor caused the dead to rise from their graves in their millions.  Mankind has been beaten badly, small pockets of resistance operate from ever moving camps.  The film takes place out in some remote woods.  Two brothers rescue some Human slave girls from a roving band of zombies.  Later that night the zombies attack their camp, in the fighting one of the brothers; Brian is captured.  Brian finds himself on a bizarre farm where the zombies force the Human captives to toil the fields, as well as to procreate.  Sensing something amiss Brian starts to unravel the mystery of the Human farm.

As you may have guessed, the zombies in this film have some form of intelligence.  They carry out simple orders given to them by the head zombie of the farm.  While they mostly resist the temptation to eat Humans at times they are allowed to, and do so in vicious fashion.  For the most part the zombies are really dumb, and slow moving, seeming completely unaware of their surroundings, but can show initiative such as the survivor of a Human attack running off to get help. The plot is all over the place and doesn't really make much sense if you stop to think about it for a few seconds.  Some things just make absolutely no sense whatsoever.  The film is very low budget, most the action confined to woodland; the home of cheap films.  The farm location is also mostly outdoors, but some aspects of it are ridiculous.  Prison cells blatantly have no lock on them, the characters don't even try to hide the fact, but just ignore it.  There is a Prison cell that consists of one waist high bar, yet the Humans are happy to remain behind it until 'rescued' ;quite humorous. 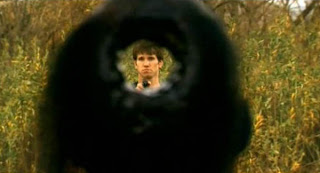 The effects are mostly CGI, and are not terrible.  There are many many head shots, as well as a few decapitations, and the range of zombies is nice enough (even including a zombie with rollers in her hair) but gore is minimal, confined to brief scenes of people having their insides ripped out.

I did enjoy the film, but it is certainly not amazing.  It takes itself far too seriously, and feels at times like Part 1 of a trilogy rather than a stand alone film.  If cheap then I would say buy it, just don't expect anything ground breaking.

NOT BAD
Posted by Daniel Simmonds at 08:34