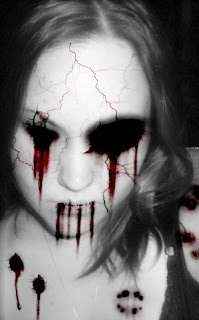 No one is going to find this the least bit exciting, but I had another Zombie dream the other day, the first time in ages.  Upon being woken by my Sister I said 'zombie dream!' so she grabbed me a pen and paper to chronicle it before I forgot.

I was at the top of a large flight of stairs with a bunch of other people.  At the bottom of this vast stairway were a horde of zombies.  Behind us was a double door which was locked, while to the side was a electronically locked door which a man stood behind.  He gave us the combination to get through the double doors, but as we did so the zombies reached us.  We tried to shut the doors behind us, but the numbers were too great and they pushed through.  Those of us who survived ran down a hill into a large Town square.  I don't know how I knew this but in the square were 20,000 zombies.  I ran into a shop and hid under a counter hoping I would survive.

Near to where I started the dream was a secret room.  In the room a Warlock kept a bunch of teenagers captive.  Some tried to escape but he used magic to disintegrate them.  The room was like a library, and had lots of evil magical objects, as well as pictures hanging on the walls, each picture representing a different element.  One of the teenagers revealed he was a Earth elemental, and opened up a gateway in the Earth picture into which the teenagers all escaped.

So that was the dream.  I think the Warlock was there due to all the Conan books I had brought that day.  Reading the backs of the books, each one seemed to feature a evil Wizard.  As to the zombies; I have no idea why they were there.  Zombie dreams are the best though, so all good!
Posted by Daniel Simmonds at 03:06