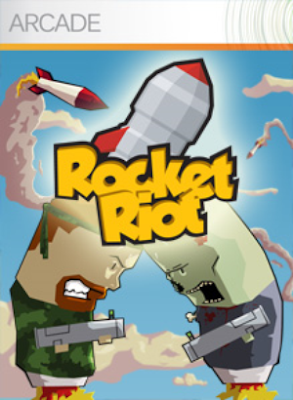 Once again, this is not specifically a Horror game, but does include Horror elements (including Zombies!)  The game was released on X-Box Live Arcade last year I believe.  It is a fun Arcady arena based shooter.

The games story involves the escape of a Pirate with no legs from a Prison.  The Pirate, angry at the jokes made at his expense whilst in Prison due to his disability gets his own back by removing the legs of everyone in the World!  Scientists soon develop a rocket pack that fixes to the body allowing everyone to fly around via rocket packs just like the crazed Pirate. 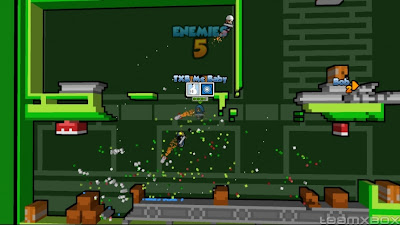 The game takes place over around 60 levels.  These take place over a variety of different locations including Science labs, the Internet, and a Haunted House among others.  Each set of levels have their own unlockable skins the player can wear.  For example in the Science levels you can unlock the skins of various Scientists.

Each character has a rocket that can be fired infinitely in any direction.  Either fired without aiming, or can be aimed for further accuracy.  Power-ups both positive and negative litter the arenas, coming out of destroyed walls.  The bad power ups are very annoying (such as the white flag that makes you unable to fire your weapon for an agonising 30 seconds).  The good power ups include giant rockets, homing missiles, and bouncing rockets.

Most levels give you a set number of enemies you must kill.  Each stage features a American Football style level with the aim to score goals, as well as a level where you must destroy a certain amount of objects. 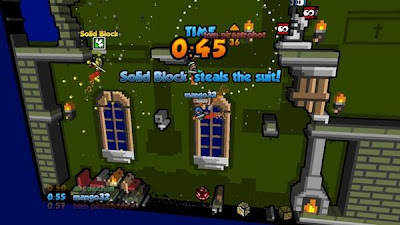 For this horror review though I will talk mostly about the Haunted Mansion.  The levels take place in and around the house.  Outside there is a Graveyard, and full moon, inside there are cellars and attics.  Enemies in these levels include a variety of Werewolves, Vampires, Skeletons, as well as Zombies.  The Haunted House stage features a unique level in which you must survive against unlimited numbers of enemies until the sun rises and they all die.

As soon as I unlocked the Zombie skin I wore it for the rest of the game (of course)  The only other relevant level is one set in Space that features an assortment of Aliens of various types, as well as robots.  Other than look the enemies all behave the same way.

At the end of every stage there is a boss, usually a giant character with a health bar.  These are all easy apart from the very last boss.  This last boss is a total nightmare!  It took me well over 200 attempts before I was able to do it, very very frustrating, especially as it was so much more difficult than the rest of the game, so a very nasty surprise to end the game on. Stupid Pirate!

The game features multiplayer, but there was no one online when I looked.  A fun game, but let down by the very bad end boss.