Hi,  another general update! My new site is not coming on at all, so am going to concentrate on this blog for the time being.  I have not done a zombie based post for an age now, hope to rectify that soon. 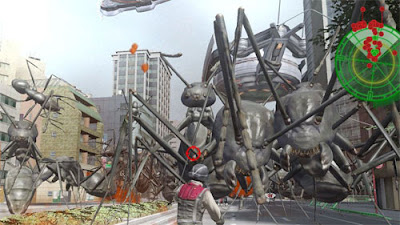 I finished Earth Defence Force 2017.  A fun game, but more sci-fi based than horror.  In the game an Alien invasion is taking place on Earth.  Spaceships keep depositing giant ants, giant spiders, and giant robots in Cities around the Earth.  Levels alternate between humongous ant nests, Cities, and Countryside.  It's a brainless shooter, but the amount of enemies on screen is terrific.  Seeing huge ants crawling over buildings, leaping spiders, and laser spitting robots is pretty scary, and most levels descend into a waves of green and yellow blood as you dispense justice Earth Defence Force style!

Started playing Dragon Quest IX on the Nintendo DS.  It is a brilliant game, very fun and not in the slightest bit frustrating.  Have come across a few zombie enemies, well they were ghouls, but looked the part.  So far the main enemy type has been various monster type creatures such as Meowgicians, and Clawserors (Cat magicians, heh). 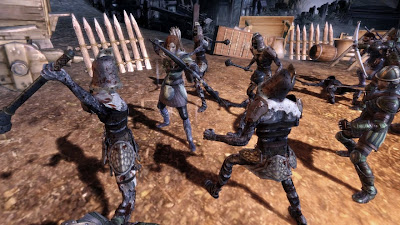 There has been more zombie based X-Box Indie games.  They all look pretty terrible, mostly involving Avatars.  I have brought them all and will be giving my horrified reviews of them in due course.  On a brighter note the Sequel to Decay Pt 1 has appeared.  Fittingly called Decay Pt 2, looking forward to trying that.

Also on the X-Box front there is a new chapter for the Survival Horror game Alan Wake called 'The Signal'.  I have yet to play the main game though.  As soon as it is cheap enough!  A RPG called Deathspank has been released on X-Box live arcade made by one of the creators of the Monkey Island series.  I assume it will have zombies in it at some point.  A new Castlevania game is coming out any week now for X-Box Live Arcade.  It is in a Metroidvania style but I fear it may be focused on multiplayer, and don't know how good it will be for people like me who can only play games single player.

Onto the film front.  I have borrowed Twilight 1, and 2 off my friends daughter.  Twilight was embarrassingly entertaining, so will review that soon (hey, it has Vampires!).  Don't know if any Horror films are due out at the cinema.  I have recently saw the awesome Inception, well worth a watch.  I saw A-Team but that is not a fantastic film, but fun enough I guess.
Posted by Daniel Simmonds at 05:22