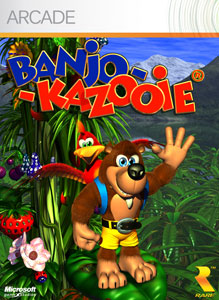 Yeah, I realise Banjo-Kazooie is not a 100% horror game per se, but I am going to try something different, just talk about the horror elements of the game. Bare with me... Banjo-Kazooie was first released on the ugly N64. It is a 3D platformer, the same style as Mario 64. Unlike Mario 64 though I really enjoyed Banjo-Kazooie. It is funny, has great music, and interesting levels. The X-Box Live Arcade version of Banjo-Kazooie has been tarted up somewhat, the graphics while still really angular are much sharper and cleaner than before, so it looks fantastic for a port of a N64 game.

You play as a bear called Banjo, and a bird called Kazooie. Kazooie rides around in Banjo's backpack and is only directly controlled when special moves are being used. The game starts with a evil witch named Gruntilda kidnapping Banjo's kid sister Tooty. She takes the bear away to her mountain lair where she plans to transfer Tooty's beauty to herself. Banjo and Kazooie head off in pursuit. The game takes place in Gruntilda's mountain base. 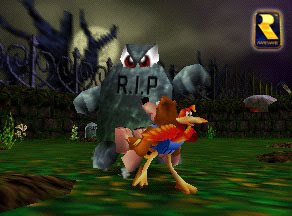 The levels are accessed by a main hub area. Within Grunty's lair there are many locked doors that require musical notes to open. These are gained within levels that are locked. To unlock levels you need to collect jigsaw pieces from within levels. There are around 10 levels in all. The levels are large arena style areas. In each level there are hidden 100 musical notes, and 10 jigsaw pieces.

Levels are varied, among them there are around three or four horror themed ones, though only one is directly 100% horror influenced. The desert level 'Gobi's Valley' is set to a Egyptian motif. Pyramids in the level lead to battles with mummies, while quick sand hides giant mummified hands. 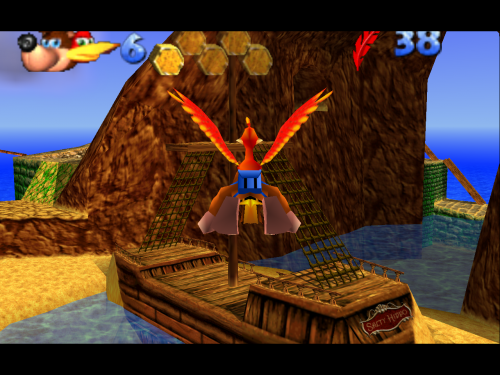 'Clanker's Cavern' is a underground level based around a giant cave in which a gigantic metal fish named Clanker lives (the lairs garbage disposal unit). Part of the level actually takes place inside Clanker, while crabs mutated by chemical waste are the main enemy type outside of him.

'Rusty Bucket Bay' is a real life inspired horror level, concerning for the most part pollution. The main part of the level is a giant oil tanker that sits in a oil polluted bay.

Popular horror is covered in 'Mad Monster Mansion'. This level takes place in, and around a haunted mansion. There are hedge mazes, possessed gravestones, bats, and gremlins outside, while inside the mansion sees you battle a Ouija board, as well as help out a church organ playing ghost, and a talking toilet. 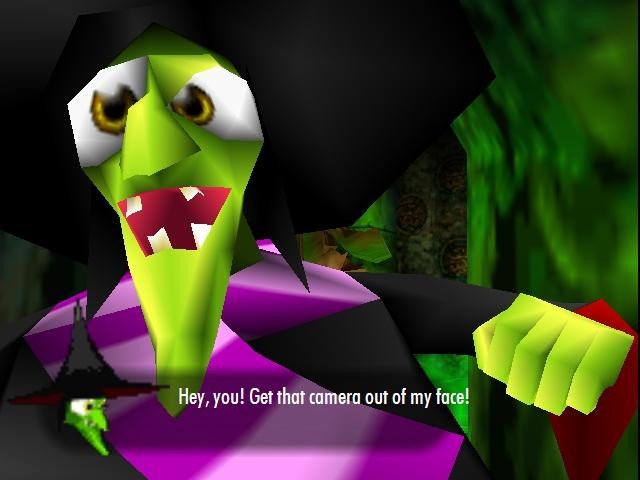 Lastly the main hub area itself is horror based, being a witch's lair. The end battle takes place at night on the ramparts of her lair, with lightning flashing in the background, and Gruntilda riding around on a flying broomstick.

Throughout the game there are many characters who both help and hinder you. Mumbo Jumbo is a witch doctor with a skull for a head. By collecting silver skulls for him he can transform you in various levels into different creatures such as a crocodile, a fat bumble bee, and giant ant among other things.  In the hub level there is Gruntilda's sister who resembles a fairy Godmother. She gives you hints to use in the board game finale (a highlight of the game) Also hidden in the hub area is a floating spell book that provides you with cheats. 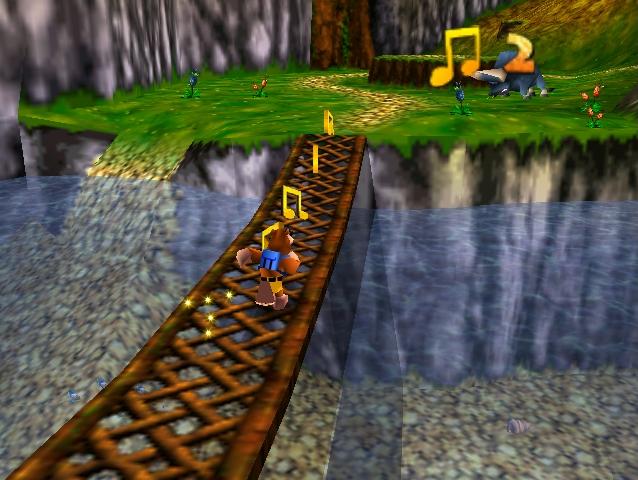 The game is fun to play, but at times the camera does get stuck behind objects leading to frustration.  Also one of the enemies; a evil snowman is hyper annoying as he is near impossible to kill and lobs snowballs at you with un nerving accuracy while laughing at you. The game is very big, I have completed about 98% of the game and am on 13 hours. Finishing the game, and owning Banjo-Tooie, and Banjo: Nuts & Bolts opens up more secrets hidden within the levels. The music is of a highly hummable standard, the hub area in particular has a version of 'Teddy Bear's Picnic' that mutates depending on what area of the lair you are in (eg; the tune takes on a Egyptian flair when in that area of the lair)

The game is about 800 Microsoft points.  If you can look past the dated graphics then defiantly give Banjo-Kazooie a try. There are no zombies though (sad face!).