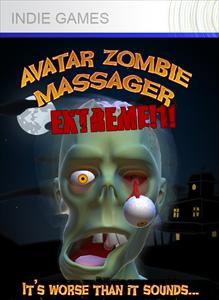 There are getting on for several billion zombie games on the X-Box Indie channel now. Unfortunately most of them are very bad. Avatar Zombie Massager Extreme is no exception, but hey, at least it admits as much in its blurb.

For some explicable reason 'massage' games are quite popular. This particular example involves you changing the speed and power of the X-Box 360 controllers rumble function. You can then use this constant rumble to somehow massage yourself or someone else. I have no idea why anyone would want to do that, and certainly have zero interest myself. 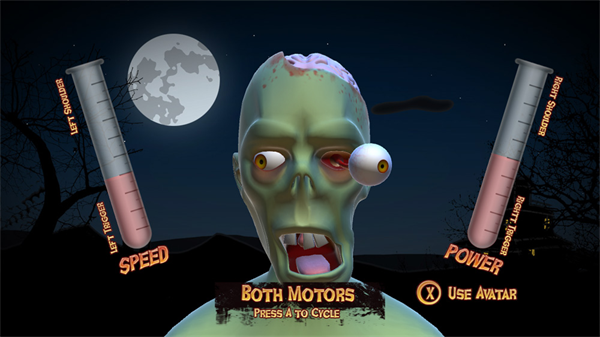 The blurb on the games description pretty much just takes the mick out of the potential buyers saying something like 'after minutes of studying what's popular on the Indie channel we decided to make a game with zombies, massaging, and avatars in, as that's what everyone loves, and so we will get rich'.  Least they were honest.

The game has a 'spooky' background of a silhouetted mansion at night. On either side of the screen are test tubes. With one you can change the speed of the rumble, while the other lets you change power. A giant animated zombie head takes up most the screen. As you increase the rumble and power, his eye still in its socket spins around, while the eye hanging out the socket wobbles. The zombie at least looks pretty decent. You also have the option to have your 'avatar' head displayed here instead. There is no sound, and nothing to do except make your controller rumble.

Totally pointless. The application is 80 Microsoft points, but please do not buy this junk. Even I refused to buy this app, and I get everything zombie based usually. The most depressing thing about this game is that it is the seventh most purchased Indie game on the 360.  People are so thick. Please, I implore you again, do not buy Avatar Zombie Massager Extreme!

Posted by Daniel Simmonds at 11:52