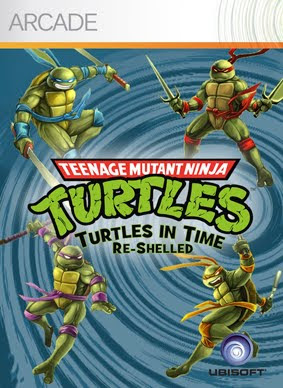 Yet again I am reviewed a blooming Turtles game on my beloved Horror blog.  Yet again I say how is a tale about a bunch of deadly mutants not Horror?  How is a giant Alien brain attempting to take over the world not Horror?  How is an army of robots and stone men not horror?! Heh.  Turtles in Time: Reshelled is a remake of the classic side scrolling fighter from the mid 1990's.  I'm not sure if it was ever an arcade game, but it was on the Snes, and a vastly different version was released on the Megadrive (called Turtles: The Hyperstone Heist).  This remake features all new graphics, and sound rather than the previously released arcade perfect port of Turtles a few years back.

The game starts with the evil Krang, and his henchman Shredder stealing the Statue of Liberty.  The heroic ninja Turtles leap into action to stop them.  However not long into their battle Shredder manages to teleport them far back into the past where they wont be able to thwart his plans, but by defeating the robots, and monsters of Krangs army in each time zone they are able to gradually progress through time... Back to the Future! (TM) 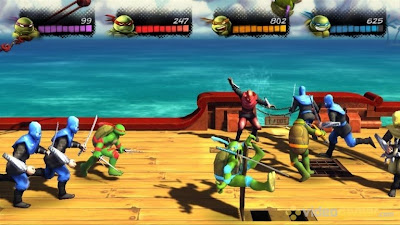 In a shocking move the game lets you play as one of the 4 Turtles.  As usual Donatello is the best character to use as his staff has a long reach.  The game is up to 4 players, and as with most games of this type is only really fun with more than one player.  As usual I only got to play the game in single player mode.

Much the same as the original version the game can be quite bland.  Each level sees you advance left to right in a straight line.  There are no lifts, or vertical movement to spice things up, though there are 2 levels in which you are on a small vehicle.  The levels are not too exciting.  They range from Prehistoric times to a Pirate Ship level, a Space Station, and even a Train, but apart from the different location they all feel quite similar.  Each level has its own obstacles to avoid.  The Space Station for instance features laser beams, and ice rays, while the Prehistoric level sees rocks falling from ceilings, as well as Pterodactyls who fly by dropping rocks on you. 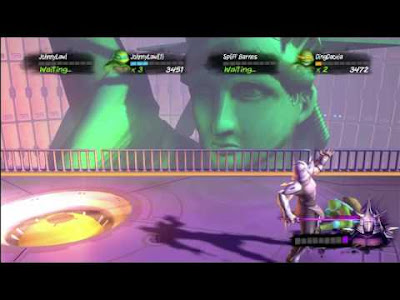 The enemies mostly are comprised of the Foot Soldiers.  These robot ninjas come in a variety of colours, and armed with a variety of weapons such as bombs, axes, swords, and throwing stars.  Other enemies include large stone warriors, usually armed with heavy weapons such as rocket launchers, and steel rods.  The bosses are the highlight in the game.  Of course Krang and Shredder appear, but also a bunch of assorted mutants, from a robot Turtle at the end of stage 2, to the fly version of Baxter Stockman, and my personal favourite; a double team of a Werewolf, and a Spiky Turtle.

My main problem with the game is the new graphical style.  It just looses so much of its charm with its new average 3d models, it would have been cool if they had included the option to have the original graphics.  When enemies are defeated they blow up, but the explosion is really crappy, and doesn't even cover the obvious fact of the defeated enemy just vanishing into thin air.  The game is quite easy, and also quite short, defiantly not worth the Microsoft points asked for (I believe it is 1200 Microsoft points).  I love the whole lore of the Turtles, but it doesn't give you value for money here.  Apart from the main game there is also a survival mode which is identical save for the fact you just have the one life and no continues.  On the plus side the music is cool, and the voices are entertaining.  I would imagine it would be much more fun in co-op.

Oh yes, there is a level missing!  The Snes game had an ace level set in the Technodrome that culminated in a fantastic boss fight against Shredder that required you to fling Foot Soldiers into the screen at him.  This omission really grates, I remember that it was my favourite level of the Snes version, sucks that it's not here!