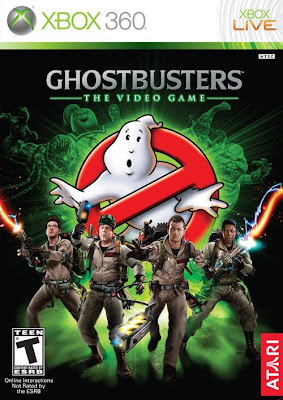 The game takes place in 1991, a few years after the events of Ghostbusters 2.  The Ghostbusters are doing well, and supported by the Mayor of New York on a Government contract to keep the City Tourist friendly.  They take on a new member (the character you play as) a young boy who is hired to test out experimental ghost busting gadgets.  Soon after the start of the game a psychic shock wave shakes the City emanating from a exhibit at the Museum dedicated to Gozar (the main demon thing from Ghostbusters).  The shock wave frees Slimer from his containment unit so the Ghostbusters head to the Hotel he was originally caught in to get him back.  Soon after the Stay Puft Marshmellow man makes a surprise return and ghost sightings spread like wildfire.  It is up to the Ghostbusters to discover what has caused this outbreak of Ghosts. 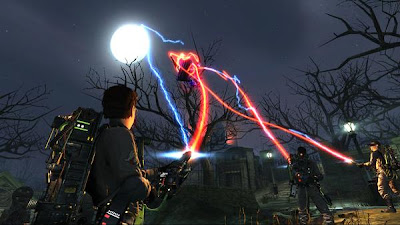 I played the demo for this game ages ago.  I hated the demo! I found the controls confusing, and the gameplay frustrating, it left a bad taste in my mouth.  Thankfully the actual game is a billion times better.  It doesn't help the demo that it's from a section about halfway through the game (and quite a hard section at that), and the controls really were not very well explained at all.  The proper game itself has a useful tutorial opening (disguised as hunting down and capturing a escaped ghost at the Ghostbusters HQ).

You play as the unnamed rookie who teams up with random members of the Ghostbusters in each level.  You are silent, but the main Ghostbusters are constantly talking amongst themselves as well as gently mocking you.  They are really funny, and really feel like the same characters that were portrayed in the films.  Bill Murry as Peter Venkman in particular is really funny.  The voices don't sound like they were just phoned in. 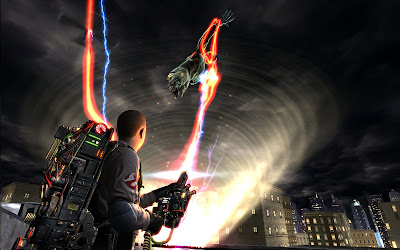 There are lots of different enemy types, but fall into 2 different types.  There are ghosts who you must wear down by shooting your proton lasers at.  These include the famous one such as Slimer, as well as game specific ghosts such as tramp ghosts, and Gozer cultist ghosts.  Once their energy bars are worn down then you can throw out your trap to capture the ghost.  The other enemy type are possessed objects.  These are far more varied.  They include everything from stone gargoyles, flying books, stone cupids, giant golems (made out of objects such as coal, or furniture), and more.  The possessed enemies can just be blasted till they fall apart. All the enemies have their own bios you can read on the pause screen

You have access to 4 types of weapon.  The iconic proton beam is the first one you get access to, other ones include a slime gun (that can also be used to tether objects and enemies together), a shotgun style weapon (that can slow down ghosts movements), and a high powered machine gun type beam that doubles as a rifle beam.  The weapons can all be upgraded by collecting money.  The money is earned by not only catching ghosts, but also by destroying the surrounding areas.  It is really funny how little the Ghostbusters care about damaging the locations they find themselves in, often making jokes about the damage they are causing. 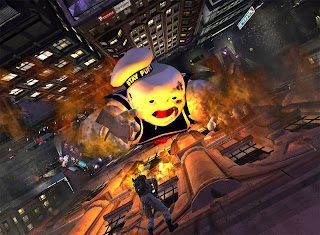 After each mission you go back to HQ where you can wonder around and look at objects you have collected (hidden in each level is a variety of special objects that appear at the HQ once collected).  These objects range from possessed Ghostbuster toys to evil paintings, and masks.  All have a little bio which is usually quite humorous to read.  The HQ is fun to walk around and the evil painting from Ghostbusters 2 is even there!

The game is not very hard, but is fun.  There are a few frustrating moments in the game but these are rare.  You never get to drive the GhostbustersGhostbusters theme never plays in its entirety.  Loading screens have the first part of the song, and the end credits have part of the song, but it never shows up in full anywhere which annoyed me!

The game is defiantly worth picking up if you have any interest in Ghostbusters.  The Wii version features more cartoony visuals, but I assume the actual game is the same.  I do also own the Wii version so will review that when I have played it.  The game does support up to 4 players in a special multiplayer mode in which I assume you get plonked down in a location from the main game in order to clear the area of ghosts and monsters, but as usual I never got to try it this way.

Posted by Daniel Simmonds at 12:16