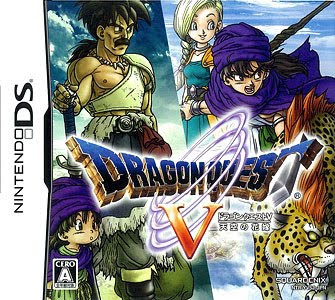 The game takes place over the lifetime of a Human male.  The game starts with his birth. 8 years later the boy travels the land with his Father Pankraz.  Your Mother was captured by Demons soon after your birth and taken to the Demon realm.  The only person able to get to the Demon realm is the legendary hero.  You and your Father are travelling the World in search of this legendary hero.  The game is roughly split into 3 sections.  The first sees you as a boy with your Father, the 2nd part sees you as a man looking for a Wife, while the last part has you with your children locating the legendary hero.  The story is very good, and surprisingly emotional, there is a lot of bad stuff that happens to you, and those you love.

The game like the others in the series is a turn based RPG, random encounters seeing you fight enemies in order to gain experience points with which to level up, as well as get gold coins to buy better weapons and equipment.  You have a team of up to 4 characters, but also are able to hold 4 in reserve who can be switched into battle at the start of any round.  Unlike many games of this type there is not an abundance of characters for use in your party.  In recognition of this the main hero is able to recruit Monsters into his team in a Pokemon type way.  It is only in the last third of the game that you no longer need to rely on Monster team members. 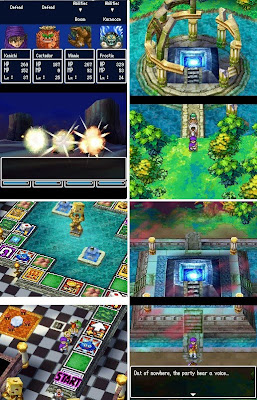 There are many Towns, Castles, and Dungeons spread over the games world.  Most Towns/Castles have a specific quest associated with them, weather it be investigating a Cavern in search of a Monster that is terrorising a small farming community, or rescuing a kidnapped Prince or a myriad of different things.

The monsters in this game are much the same as previous Dragon Quest games, as is the case with the Final Fantasy's.  They are a collection of animals, and monsters, and most have amusing names such as the giant birds 'Grudgerigars'.  As usual the title Dragon Quest is misleading as Dragons do feature as enemies, but they are hardly main enemy types.  As usual should you fall in battle you appear at the last Church you visited with all your experience gained intact, but half your Gold removed.  There are banks you can deposit Gold in though.  Bosses in this game are far fewer than usual.  Many Dungeons don't have bosses, when they do appear they are usually story related rather than being a Boss for the sake of a finish to the location.

As said the story is quite bleak at times with many people being kidnapped, tricked, and even killed.  The main antagonist is a Demon Priest, and his cohorts who are attempting to open a gateway between the Demon realm and the Human realm so that the Lord of the Demon realm can invade.

The game is really good, and the graphics are bright and colourful.  Also, there are zombie enemies.  Early on Ghouls make an appearance, they are quite a low level enemy type.  More common undead are undead Knights, they come in a variety of types, and have an eyeball hanging out its socket.  Towards the end of the game Necromancers appear more commonly.  So undead = an excuse to review the game on this average Horror blog!

Really recommend getting this, specially as it is under £10, and is a 30 + hour game.  DS exclusives include some pointless stylus controlled mini games, as well as the option to swap objects with other Dragon Quest DS owning players.