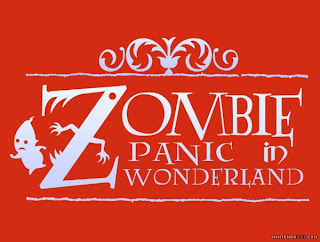 A friend commented that she was interested in the sound of this game, but was worried it was a bit expensive.  I have had it brought from day 1, just sitting on a SD card, so thought that I would give it a shot to see if it was worth her buying it or not.

In Story mode you play as a Japanese Anime boy.  He has gone to the shop to buy some stuff when he notices the Town he is in is under zombie invasion.  Eventually he comes across a Gnome who tells him the source of the outbreak is up North.  Heading North he comes across various characters such as Snow White, the Tin Man, Dorothy and others.  Eventually he gets to the Castle of Prince Charming.  It seems that he may well be behind the outbreak! 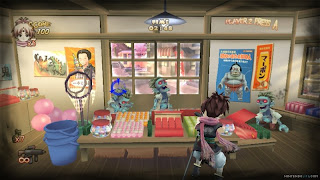 The game is pretty much a shooting gallery.  Your character can move left or right, but cannot move into the screen.  Basically each stage involves you moving a crosshair to take out enemies while avoiding their attacks, and projectiles they throw your way.

Your main weapon is a machine gun that is quite effective.  Power Ups let you also use a flame thrower, and a stronger machine gun, as well as shoot rockets.  There is a percentage bar at the bottom of the screen.  The more enemies you kill the higher it goes, when it gets to 100% the stage is done.  The stages look beautiful.  Each one has lots and lots of scenery that is all destructible, by the end of each stage you are pretty much standing in a barren field, while the start sees you in such wonderful locations as the yellow brick road, Prince Charmings Castle, and a Graveyard.  The scenery collapses like it is stage design, walls, trees, and fences all fall over sideways.  The levels are very varied.  Starting off in a Japanese setting complete with a Wario Ware style song you progress into more classic fairytale settings. 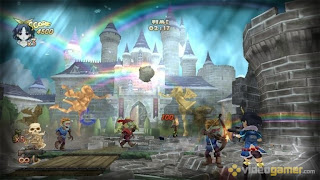 There are lots and lots and lots of enemies in this game!  The main enemy type are zombies.  Zombies die a lot easier if you shoot their heads off.  There are also fat zombies, as well as a multitude of dressed up zombies.  You get Sumo Zombies, Ninja Zombies, Jester Zombies, Knight Zombies, and even a Santa Claus Zombie!  Other enemies are also abundant, these include animals such as frogs, and crows, and more monster type creatures such as Ogres, Dryads (tree monsters), and skeletons.  There are 3 boss encounters during the game.  Each of the bosses are fun to fight, and have various attack patterns.

The game is quite arcadey, and as such is quite short.  There are 9 stages that include 3 boss stages, so only really 6 proper levels (though there is an extra stage in Arcade mode).  As well as Story mode, there is also Arcade mode that lets you choose any level, and a survival mode can be unlocked.  Other unlocks include a variety of characters such as Little Red Riding Hood, and Snow White, but these just appear to be all the same apart from the visuals.  The game is 2 player, and I imagine it would be really really fun in 2 player.  I only got to play the game in single player, and it was fun.

The game world is bright and colourful, and the music is really good.  I would say that it is quite an easy game though.  The game costs 1000 Wii Points which is quite expensive for what it is, but if your after a fun arcade zombie shooting experience then I would recommend this!
Posted by Daniel Simmonds at 08:30