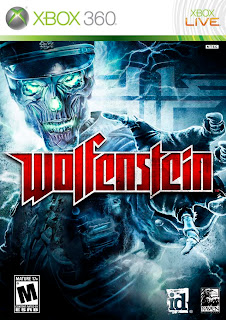 Return to Castle Wolfenstein on X-Box was a game that I found so frustrating that I snapped the disc in half.  A year or so later I brought it again cheap, and again snapped the disc in half.  It was not a fantastic port of the PC version.  Utterly dreadful stealth sections ruined what could have been a fun game.  Would the latest installment of the series be any better?  It may seem silly buying a sequel to a game I hated, but the original Wolfenstein 3D I have recently gone through on X-Box Live Arcade; it was a fun game.

Wolfenstein casts you once again as B.J Blazkowicz.  The intro sequence sees him blowing up a Nazi U-Boat and discovering a strange magical amulet.  The amulet plays a key role in the game.  B.J travels to a small German (maybe?) Town called Isendat where the Nazi's have discovered some ruins belonging to an Ancient Race of people who harnessed the power of an alternate dimension known as Black Sun.  Soon after arriving at the Train Station his cover is blown, and is never retrieved again.  Thankfully this means there are no dreadful stealth sections!

The game has a main open world hub level which is the Town.  You are free to wander the Town, investigating houses, collecting hidden items, and files, as well as choosing missions from either of the 2 factions, and also discovering side quests by talking to allies.  The Town has a Nazi presence, so you are free to either just shoot your way through everywhere, or be more cautious, using the sewers and rooftops to get around.  The Town is quite maze like and has passages, and tunnels all over the place.  The Town also has several shops where you are able to use your collected gold to buy upgrades for your weapons and powers. 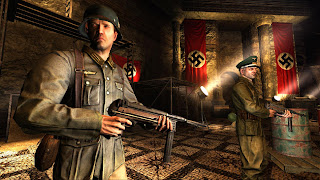 There are around 12 main missions, or levels.  These range in size, but all involve mostly shooting everything that moves.  The game really is mindless, but in a good way.  The enemies for the most part are Nazi Soldiers, who are very weak, and so real fun to kill.  Their limbs, and heads can be blasted off, but it is not over the top, and was about a third of the way into the game until I even realised this could be done.  Other enemies include super soldiers who use experimental weaponry such as jet packs, and proton beams, as well as Wizard type characters who can throw energy balls at you, as well as create force fields for other enemies.  Lastly there are the weak mutants who attack via melee.

The levels are quite varied, and start off quite bland but later get really good.  2 levels in particular really stood out.  One sees you start on a route to a Farmhouse where a resistance member is being held captive.  It seemed like the mission was going to be quite small, but discovered in the Farmhouse was a secret elevator which led to a massive underground base that was really epic to fight through.  Another level is set in a Hospital.  You spend half the level with no combat, as you hunt down a mysterious invisible assassin who is systematically murdering all the staff and patients.  That level had a real F.E.A.R style feeling of horror to it, and was really slowed in pace to other more action packed levels.

The weapons are fun to use, and have real weight and impact to them.  Shooting an enemy will result at the least in them getting bloody.  As well as machine guns, and rifles you also get access to super weapons such as a Tesla Cannon, and some kind of disintegrating beam. In addition you get access to 4 magical powers.  One speeds up your movements, another slows down time allowing you to get under closing gates.  Your third power renders you able to shoot through force fields and armour which especially later in the game comes really useful.  My favourite is the shield ability.  This encases you in a bubble that is impervious to damage.  Better still bullets bounce off it causing funny moments when enemies accidentally kill themselves via reflecting projectiles.  Weapons and Magic can be upgraded with increased damage, silencers, and sniper scopes all attached to weapons. 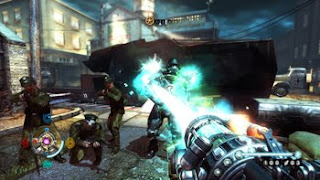 The enemies have great death animations, from writhing around on fire, to holding their throats as blood jets out, to falling off balconies screaming, all our fun to watch.  The plot on the other hand is quite rubbish, really this was expected though.  The game seems to be a proper sequel to 'Return..' referencing events from that game, as well as having the main bad guy be the same.  The game frequently has short action cutscenes which are very bad looking, and look very last generation in their blocky unrealistic character movements.

The game is really lots of fun, but not the least bit intelligent.  Objectives usually just task you with getting from A to B, and there is not a lot of variety in what you do.  Just shoot, and shoot some more.  There is lots of replay with all the hidden files and gold through out the games levels.

The game features multiplayer modes such as deathmatch. I briefly tried this, but no surprise there was virtually no one playing it.  It is a real shame that over two thirds of the achievements are earned via multiplayer, and so I wont be getting them.
Posted by Daniel Simmonds at 06:29