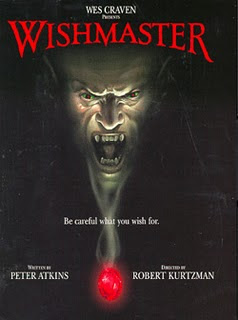 Wishmaster is a film by Wes Craven.  It has all the hallmarks of a 80's slasher film in the vein of Lepracaun or Nightmare on Elm Street et al, yet I was surprised to find the film was released as late as 1997! There are lots of cameos from famous horror actors including such ones as Ted Raimi, Kane Hodder, and Robert Englund.

The film starts in ancient times, a evil Djinn (a race of Demons that live in the veil between worlds) is causing havoc at a sultans palace.  Djinns grant wishes, they can only act if it is via a wish.  Unlike the Djinns of pop culture (Djinns are also known as Genies) the Djinns hate humans and purposly twist the wishers wish into a grotesque parody of itself.  Anyway the Palace Wizard manages to trap the Djinn in a enchanted gem.  1000 years later and a ancient statue is acidently destroyed, encased in the centre of the statue was the gem which a attractive woman; Alexandra accidently frees the Djinn from after rubbing the gem.  For the Djinns race to escape thier prison of being between worlds the releaser must use thier three wishes, so the Djinn starts a wave of terror designed to scare Alexandra into using her three wishes so that his people can enslave the world. 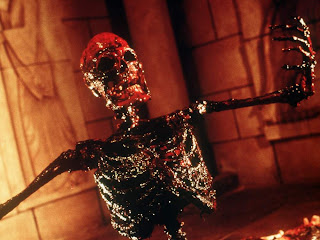 The film is really enjoyable in a trashy kind of way, and screams 80's horror.  Lots of cool effects are used.  Particulary pemorable is the first 5 minutes in which a man walks through a party where the guests are all being murdered.  Insects and monsters are bursting out of people, one man has his skin all fall off him, while another has been turned into a human snake creature; very entertaining. 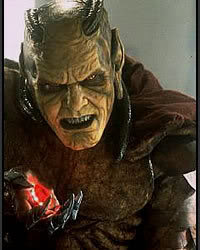 The Djinn is not that original a look, but he is able to shape shift.  He has a similer type of black humour that Freddy Kruger has, but he isn't as overt as Freddy.  The Djinn is only able to kill if someone makes a wish.  Usually he can turn there wish into a reason to kill.  For instance a girl wishes she could stay beautiful forever, the Djinn turns her into a mannequin.  All his kills are based around these cool twists, and are very entertaining.  For each wish the Djinn grants he gets stronger, able to feed off the souls of the wish makers.

The whole plot to the film really is not original at all, but as a homage to 80's horror it is excellant.  It doesn't try to be anything other than shoclky fun.  There are 3 sequals to this film, each time with different characters, will probably hunt them down.
Posted by Daniel Simmonds at 13:05