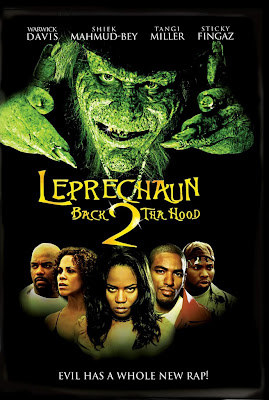 God this is going to take some effort, real down, so don't feel like doing a post!  Leprechaun: Back 2 tha Hood is the sixth, and final entry in the Leprechaun series.  Is it a fitting end though? The film starts with a cool animated back story for the origins of the evil Leprechaun which finally lends some origins to the series, and ties up the completely unrelated films.  I had before thought each film concerned a different Leprechaun, but this explains that that isn't the case.

The Leprechaun 'won' Leprechaun 5 so the film starts with a showdown between the Leprechaun and his latest victim in the ghettos of Compton.  His latest victim; a Priest manages to dispatch the evil one with Holy Water mixed with 4 leaf clovers.  The Leprechaun is dragged to Hell as a result, but the Priest keels over dead of a heart attack.  A year later 4 poor teens stumble across the Leprechauns hidden chest of gold.  They immediately go on a spending spree, full of hope for their future after coming into wealth.  By getting hold of the gold though they have unwittingly resurrected the Leprechaun who goes on a rampage to get back what was 'stolen' from him.  After 1 of the 4 teens are killed they realise they are being hunted and must come up with a plan to stop the Leprechaun before they too end up dead. 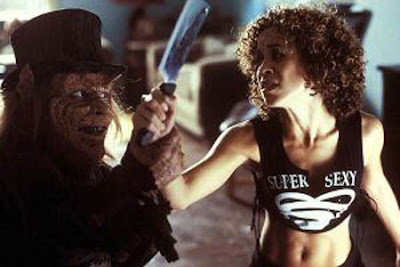 The film is even more serious in tone than the last film, despite some kooky out of place scenes.  The Leprechaun is again hooked on drugs, this time addicted to Bongs thanks to a party guest who assumes the little fellow is a hallucination from his drugs.  He soon discovers this not to be the case once the Leprechaun has jammed the Bong through the mans chest.  The Leprechaun has different clothes for this film.  His clothes are dark green this time around, almost black in tone.  The Leprechaun shows himself to have immense strength in this film being able to rip off limbs.  His new special attack is leaping onto people from off screen, which he does several times.  He has no magical abilities this time around.  He cannot control people, cause illusions, or use Jedi style force powers.  This may be due to the fact that for the films duration he has no access to his gold (that is said to grant him his powers)  Warwick Davis is again in fine form, and again for a change he doesn't speak in rhyming couplets.

The main 4 characters are a likable but flawed bunch.  There is a drug dealing rude boy who wants to become a better person, a comedy character druggy, and 2 girls who dream of getting out of Compton and making a life for themselves.  Again the side cast include a bunch of nasty gangsters who are also after the teens for their own reasons.

It is good that the film gives an origin for the Leprechaun, and also kind of explains how he keeps coming back despite being totally killed off at the end of most of the Leprechaun films.  It is the first film that really feels like a sequel as opposed to a completely different tale.  I guess being set in the same location helps that.

There are a lot of deaths, the Leprechaun on fine murdering form, and he gets a lot of grief in this film, being beaten up, shot, and run over, though he seems for the most part impervious to pain.

Posted by Daniel Simmonds at 11:22

u learn something everyday....never heard of this

This series really had some ridiculous sequels