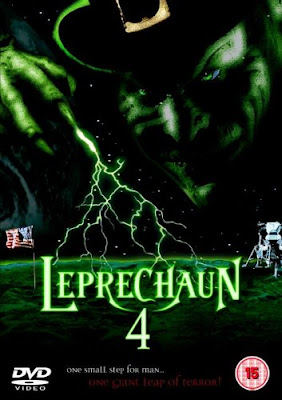 My god.  You can always tell when slasher films have collapsed into ridiculousness when they start being set in space.  Friday 13th managed 9 films before it did that, for the Leprechaun series though 4 films in and they have gone to space!  This film is so terrible it is actually good.

On a Alien Planet somewhere a Leprechaun (again played by Warwick Davis) has kidnapped a Princess with the aim of marrying her and becoming King of her Planet.  A squad of Space Marines tracking the wee Demon launch an assault, where they rescue the Princess and seemingly destroy the Leprechaun.  One of the Marines urinates on its severed foot which somehow results in the feller hitching a ride in the Marines privates.  Back on the space ship the Leprechaun emerges from his disgusting hidey hole, and starts launching chaos as only he knows.  He wants to get his bride to be back (who is being experimented on by a insane Dr), and get his gold back (that has been shrunk via shrink ray). 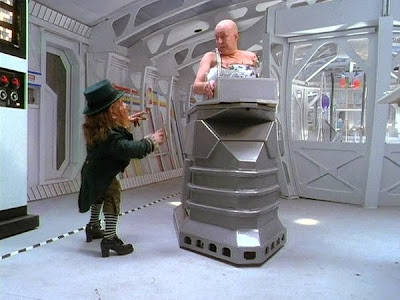 The film must have a really bad budget judging from the look of the sets.  Sci-Fi is always a cheap way to make a film.  Exterior shots of the space ship are obvious CGI made, while the paper maiche caverns from Leprechaun 2 are resurrected along with a few really obvious bad effects.  In one scene Warwick leaps across a room, he has a highly visible cable towing him along.  In another scene some Marines are wearing bio suits, yet one has a embarrassingly obvious massive hole in the back of the suit.  In yet another scene a Marine is crushed to death by a massive block of metal, yet the metal block kinda bounces, and looks very hollow.

Also of note is the script.  Thank the heavens that the Leprechaun no longer speaks in rhyming couplets, it makes a big difference on him.  The Leprechaun is cool, but the deaths he cause are no longer too inventive.  He has a little light saber he chops someone up with, and he turns someone into a giant Spider/Scorpion/Human mutant, but other than that he kills people off in more traditional ways.  There is quite a high body count.  The script truly is terrible though, some memorable lines such as a female Marine saying 'Do you think I caused this by giving him (the Marine whose privates the Leprechaun was hiding in) a boner?' Awful.  Also the film unashamedly flaunts the females.  It's custom for the Princess to announce a persons death sentence by showing them her chest, and a female first has a bucket of water thrown over her (due to acid) and later has her trousers ripped off during an attack.

The characters are all extremely hateful.  The Marines all seem to be utter retards, with their metal headed captain just as bad.  The Scientists are annoyingly toady, and superior acting, and the head Scientist makes his role very very camp via his vastly over acting and his crazily over the top facial expressions.

The film does get exciting though.  One part of the film sees two action scenes happening concurrently.  Some Marines are battling the mutant creature in its lair, while another Marine (bare chested and muscly) is fighting a gigantic Leprechaun in a cargo bay.

The film is extremely silly, but really fun.  It obviously has no budget, but its badness makes it very watchable!