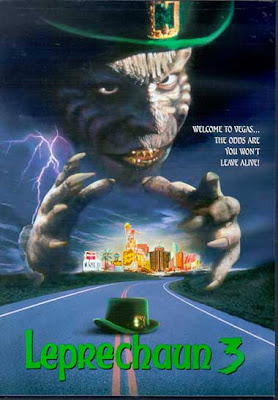 So as part of my Leprechaun marathon I saw Leprechaun 3 the other night.  Again, this film was completely unrelated to the previous 2.  I like to think that the Leprechaun species all look identical, with each film about a different Leprechaun.

The film is set in Las Vegas, and around a Casino called 'The Lucky Shamrock' or something.  A Pawn shop across the street receives a ugly statue of a Leprechaun which has a necklace around it which the store owner is warned never to remove.  Ignoring the warning the necklace is promptly removed which leads to the statue coming to life. It is another evil Leprechaun!  A naive teen on his way to college visiting the Pawn shop comes across one of the Leprechauns lucky gold coins; able to grant a single wish to anyone who owns the coin.  The film involves the Leprechaun causing chaos and evil as he attempts to track down his missing coin. 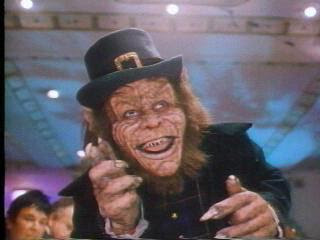 For this third film Warwick Davis yet Again reprises his role as the little troublemaker.  Yet again only one thing is able to kill him, and yet again it is a completely different method to what has come before. His script is terrible this time though.  Before he had rhymes for most of his talk, but here the rhyming couplets are utterly terrible, and painful to hear as they are so stodgy, and ill thought out.  He still looks the part which is one good thing, and the deaths are the most inventive so far.

Most the deaths are very entertaining to watch.  From people whose backsides literally explode to magicians whose tricks go spectacularly wrong, the kills are fun, with Warwick seeming to relish these.  The 2 main characters are more likable, though the boy is very irritating at times, especially later on in the film (it now seems that a Leprechauns bite causing the victim to turn into a Leprechaun him/her self!  The female lead is very attractive, it helps that shes wearing a revealing outfit for the most part (she is a magicians assistant). 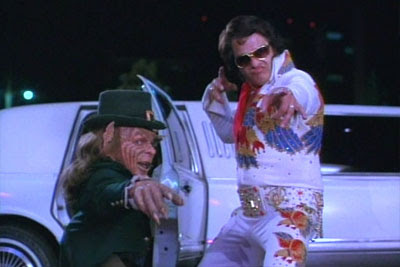 The plot is as silly as ever, this time featuring Gangsters, crooks, and gamblers.  There is more of a honorable streak throughout the film this time.  For the most part it is only the bad people who end up dead due to their own greed and stupidity.  The film certainly preaches the evils of Las Vegas, but also inject an essence of life into the glitter, and neon signs, making the Town seem a magical place.

Enjoyed the film, the inventive deaths made it fun, and the setting was a breath of fresh air.  The script is pretty dreadful, but as a third film in a slasher series what do you honestly expect?

Posted by Daniel Simmonds at 14:57