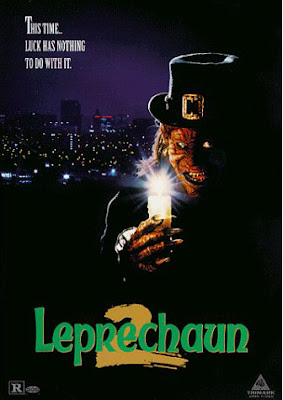 As I have mentioned in a previous post; I have recently gotten the Leprechaun box set which has the first 5 films (yet not the 6th one for some reason). Leprechaun 2 again stars Warwick Davis as a psychotic Leprechaun, yet seems to be totally unrelated to the first film.

Every 1000 years a Leprechaun has one chance to get a bride via magical means.  After being foiled in Ireland the Leprechaun vows to return in a 1000 years time to get the ancestor of the man who foiled him as a bride.  1000 years later the Leprechaun appears in a City in America (maybe New York or Los Angeles?) where he has traced the girl he plans to marry. However during his kidnapping of the girl, the girls boyfriend ends up with one of the Leprechauns golden coins.  Before the wee fellow can retire and make little Leprechaun babies with his new bride he must retrieve his golden coin.

Like the previous film the plot is pretty terrible, and again seems to outstay its welcome despite being under an hour and a half in length.  The location this time of a big city means potentially more victims, yet there again does not seem to be many deaths, I think in total there were about 5 or 6, though some were quite inventive! One in particular sees a man going to kiss what he thinks is a ladies chest, but is in reality 2 spinning blades.

The Leprechaun appears to have more powers than the previous film.  He is not only able to imitate peoples voices, but now is able to summon illusions of people, as well as change himself to look like people.  He is still able to quickly assemble vehicles, in this one he creates a little go-kart complete with spikes, and a humorous anti 4 leaf clover sign (a nod to the previous film).  In Leprechaun 2 though it seems that 4 leaf clovers are no longer effective.  For this film the only thing that can hurt Leprechauns is wrought iron, of which there is lots and lots throughout the film. 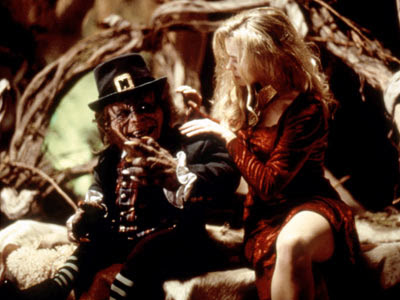 The film takes place during St Patricks day, so there are many many people dressed as Leprechauns meaning the real one does not look out of place.  One bizarre scene in particular sees the Leprechaun at a Pub that is full of midgets dressed like him, as he takes place in a drinking competition the midgets all chant 'one of us! one of us!' perhaps as a homage to the classic 1930's horror film Freaks.  Again the film tries to inject humour into the proceedings, but the humour is more miss than hit.  At times the pacing of the film reminds me of Gremlins 2 with odd unrelated humour scenes occurring for no real reason (such as the Leprechaun going to a Coffee House to sober up).

Warwick Davis is again excellent as the villain.  The female he is after doesn't have a lot to do in the film, but she looks pretty, and isn't stereotypically useless.  Her boyfriend is terrible at acting angry or upset, almost embarrassing in some scenes where he is shouting curses, and meant to be really upset, heh.  The boys mentor Morty is fantastic and nearly steals the film, though later plot developments see him descend from his throne as highlight of the film.

I did enjoy this film, it is well worth watching, a good sequel.  Look forward to seeing the rest of them!  Though must warn that the Leprechauns hideout does look legitimately like it was made out of paper maiche!

Posted by Daniel Simmonds at 06:07