How to Survive a Zombie Apocalypse - The essential guide to surviving the inevitable zombie apocalypse! 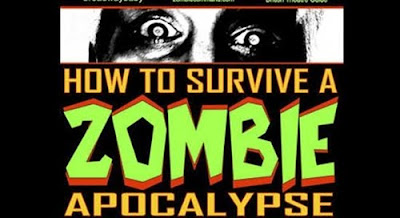 'How to Survive a Zombie Apocalypse' is a cult seminar series created by zombology guru Dr Dale Seslick.  The aims of the seminars are to educate both novices, and survival experts alike on the best methods to survive the coming zombie apocalypse.  Such a serious subject as Zombie Armageddon can be a little dry, and grim, luckily though Dr Dale and his crew inject lots of humour into their frequently bizarre discussions on the topic.

Each seminar while being mostly improv does feature a basic structure.  The seminars are led by Dr Dale, and include other members of the world renowned School of Survival such as Science expert Judy O'Dea, survival expert Donald Straite, and Tristen Granger.  The seminars cover all the essential zombie apocalypse topics you would naturally want to know.  These include topics as the safest places to go, and best weapons to use, to less generally discussed topics such as the secret to group defence, and zombie recognition techniques. 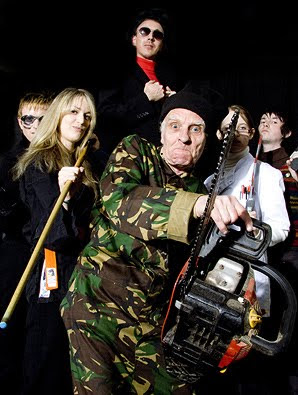 Audience question and answer sessions are a key part to the improvisation, and naturally with such things do rely on the audience to interact with the experts for the best and most comedic (yet knowledgeable) results. The Simulation section has the crew displaying their amazing acting skills as they role play possible situations that could come up during the apocalypse.

The show, or seminar as it should be titled started life back in June 2009, and over time became a cult event winning lots of praise from many different publications (including the fantastic Fortean Times!).  The show is mainly all improvisation, and as such no two seminars are the same.  I am sad to say I personally have never yet seen it.  I believe on their last Tour they had a show in Leicester, but I so hate leaving the safety of Northampton.  Currently they are on their 2010 UK Tour, so if they are ever in your area I highly recommend catching them.  Next time they are anywhere near Northampton I will defiantly be checking them out.

In addition to their show they also have a Podcast (available from i-Tunes).  This weekly Podcast is recorded from the School of Survival HQ, each episode roughly 30 minutes long, and mostly quite funny, and random.  The show has a simulation section (such as what to do if a zombie appears while your on a aeroplane; the answer in this case is to flood the plane with water!) as well as listener questions and general goings on at the School of Survival.

In August the esteemed Dr Dale is releasing a book 'Dr Dale's Zombie Dictionary; The A-Z Guide to Staying Alive' which promises to be the "ultimate alphabetical reference guide on how to survive when the zombies finally arrive and attempt to eat us all".  If I can afford to buy it, I shall do and give my thoughts. They will be doing a Tour later on this year to promote the book.

For further information on the show, and Tour Dates then head to http://www.howtosurviveazombieapocalypse.co.uk which will feed all your needs.  Dale Seslick can also be found on Facebook, as well as Twitter.  It is good that there are such people as him to provide illumination to the mostly unprepared masses!

Finally; Dr Dale and crew have a brand new seminar coming this August at Edinburgh, called 'How To Survive A Zombie Apocalypse : RELOADED'.  It's going to be on from the 6th August to the 29th August at the Zoo Southside - Venue 82.  If your interested, and in the area tickets can be booked from the website.  "Brain Destruction is guaranteed"!
Posted by Daniel Simmonds at 12:32

Amiable post and this enter helped me alot in my college assignement. Thanks you as your information.