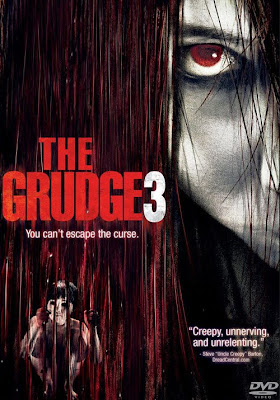 I knew The Grudge 3 was being made, but I didn't realise it was out until I saw it for cheap on Amazon. It is the American made Grudge 3, rather than the Japanese one (not even sure if Ju-On The Grudge 3 has been made).  I put off seeing it as I'm a bit Grudged out at the moment after experiencing the horrifying (ly bad) Nintendo Wii Grudge game.

The Grudge 3 starts off with the young surviving boy from Grudge 2 at a mental hospital.  It's not a spoiler to say that he is killed in the pre credits sequence.  The Grudge's curse is spreading as the remaining tenants at the Chicago apartment are getting killed off one by one.  The arrival of a mysterious Japanese woman signals a possible end to the madness as she reveals that she knows a way to stop the spread of evil.  But will she succeed or will the curse claim her life too?

The films plot is much more simplified this time.  Grudge 2 took place at various times, and with various characters.  This film centres around the care taker (Max) of the cursed apartment block, and his 2 sisters as they slowly become keyed in to the origins of the curse, and start to see the creepy woman and boy ghosts.  The younger of the two sisters is just a child, yet she fore goes the usual 'creepy child' syndrome and instead comes across as a sweet kid, even lending the ghost boy her Mr Potato Head early on in the film.  The older of the two sisters is the films main lead and is very likable (and beautiful) though also too human, all too ready to ignore the possibility of the curses existence.  Max's transition from caring guardian to crazed psychopath is well done, and very gradual. 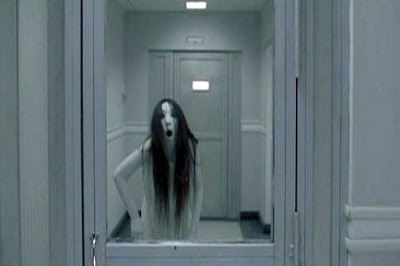 There is a lot more deaths this time around.  It's some sort of rule for horror franchises that each film has to have more deaths than the one previous, this is no different.  Many of the deaths mostly occur off screen, with just the build up to the characters death shown, but these build ups are entertaining.  One character is plagued with pictures bleeding paint in the moments leading to her death, while another in a secure mental hospital is chased through heavily locked corridors by the ghost woman, most the deaths are cool.

The ghosts this time appear to be different actors.  The ghost boy in particular looks taller than before which was distracting.  They are visibly wearing caked on white make up which I did not notice before.  I don't know if it is supposed to be make up, or if its just bad ghost design.  The characters are a lot more likeable this time around, so you really do wish for their survival.

The film is a good entry in the series, though with the ghost woman/ghost boy part of the story finished I can't see how there could be a new film coming for the franchise.  A cool film, well worth a watch.  Lets face it, anything is better than the original Grudge!