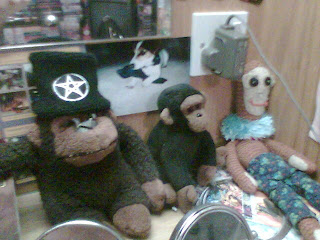 Hey there.  Just got back from a whistle stop tour of Hell.  Blasted my way through it and out again. My new site I am still waiting for, my web designer is taking his sweet time!  If I was actually paying him for his work I might have something to legitimately complain about, as it is, it's hard to moan at someone who is doing you a huge favour!

Lots of games I am playing at the mo, but none I want to review  before I complete them.  These include Doom II on X-Box Live Arcade, Viking: Battle for Asgard, Might and Magic (the DS one), and the truly terrible The Grudge on the Wii.  Ghoul Patrol; the sequel to Zombies Ate my Neighbours was released on the Virtual Console last Friday, so I got that.

On the film front; I have a growing pile of DVD's waiting to be watched, and several literal mountains of VHS cassettes, though they are not all horrors. Book wise I am steadily building up a collection of James Herbert horrors, as well as Dean Koontz.  I just have no darn time to fit reading into my life!

I played Wet recently.  While not a horror game, it is an action game influenced heavily by 70's grind house. You play as an assassin (voiced by the beautiful girl whose name I forget; she played Faith in the Buffy series) armed with duel pistols, and a katana which you use to violent effect.  The main bad guy is voiced by the brilliant Malcolm McDowell.

Lastly I am doing a scientific experiment.  I have a shot glass 1/3 full of blood and am monitoring it daily to see what it does.  So far it has turned into a jelly type substance, exciting times!
Posted by Daniel Simmonds at 12:57

Orrr kill the professor from the powerpuff girls and pour in some Chemical x!

All of these I feel will make the experiment a spectacular success!