So E3 has been and gone.  Some cool announcements!  The most exciting for me was the hinted at new Silent Hill game has been officially announced.  Tentatively titled Silent Hill 8 it is due to be released on the X-Box 360, and Playstation 3.  You play as an escaped convict named Murphy Pendleton whose escape leads him to the doomed Town of Silent Hill.  Quite unfortunate that! Apparently the game is supposed to feel more like the early Silent Hills.  My only concern (other than Silent Hill 5 the previous game wasn't that good) is that the genius Akira Yamaoka is not doing the soundtrack.  His music is a defining feature of the Silent Hill Universe, so am worried what the replacement music is going to be like.

Also announced at E3 was a new Castlevania game for X-Box Live Arcade.  It looks to be level based, but keeping the open level structure of the Metroid-vania style games.  A multitude of characters from the previous games are playable, but it seems to unfortunately be relying on co-op. with up to 4 players.  I hate Co-op due to having no X-Box friends.  There was also a new trailer for Castlevania: Lord of Shadows.  The game looks fantastic, full of stirring music, a big cast including Patrick Stewart, and Robert Carlyle, and gigantic monsters and demons.  It just doesn't look anything like a Castlevania game though. 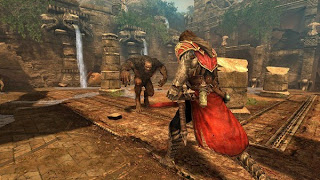 A new Red Faction game was shown.  It looks to be more horror based.  It seems you play as one of the bad guys from Red Faction: Guerrilla.  Your faction have retreated to beneath the surface of Mars after your defeat in that game...but it seems your not alone down there.

A Resident Evil game was revealed for the PSP, but I know no details about that game. More details were shown of the Zombie-tastic Dead Rising 2  There were most likely a lot more horror game reveals at the show, but in all honesty I did not follow it much this year.
Posted by Daniel Simmonds at 13:45