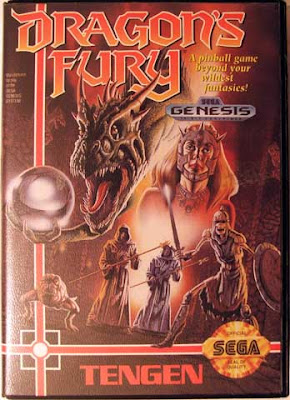 Well, here in the UK it is Fathers Day today.  My Dad is off on holiday somewhere in Europe, so am doing a blog post in his honour.  Dragon's Fury is a pinball game released for the Megadrive back in 1992.  It features a unique Gothic style to it's Horror based table, and has excellent music, all heavy metal style instrumentals.

When I was younger there used to be a Video Rental Store that my parents would rent me games from.  If you liked the game you rented you were able to buy it.  I don't recall if it was my Dad who rented Dragon's Fury for me, or if it was one I chose.  At the time I was off School ill, as I was feeling sick playing Dragon's Fury made me feel ill, so it made a small impression on me.  My Dad took the game back to the store, but later that day he revealed to me that he had in fact brought the game for me (perhaps as a get well soon present?).  As such the game holds a special place in my heart, and is one game I would never part with.  Playing it recently for this review I noticed that it still has passwords written at the back of the manual by my Dad which was a cool discovery. 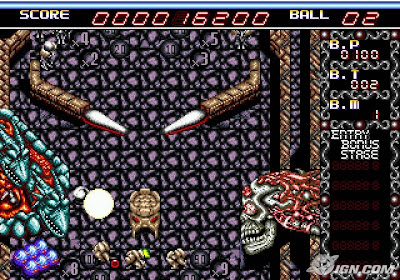 The game is probably my favourite pinball game.  The Gothic setting is cool.  It has H.R Giger levels of details on the table.  There is just the one table, but it is split into 3.  The top area of the table has Monks wandering about.  The middle of the table features as its centre point a ladies head.  By activating switches you can alter the appearance, each time the woman gets more and more monstrous looking until finally the head is a Dragons head, plus an entrance to a bonus round game.  The bottom table has a Dragon at one side of it, and a Skull at the other side.  Whenever you loose a ball the Skull laughs with a loud rumbling digitised laugh.  Skeletons, demons, and insects make up most the moving obstacles on the table which the ball can destroy.

There are 6 bonus rounds that are accessed by hitting various switches around the table.  The bonus tables are single screen and usually task you with destroying a monster.  In one you must defeat a 6 headed Dragon, another sees you tasked with destroying 6 possessed urns, while another one sees you assaulting a castle defended by fire Knights.  Each stage has its own fantastic music to accompany it.  The main table has a truly epic heavy metal track that plays for something silly like 8 minutes before it loops.  It is one of my favourite pieces of game music ever! 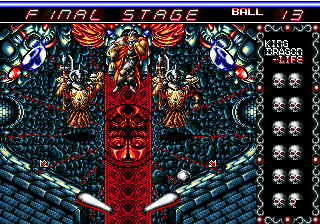 By getting a Billion points you get access to the end of game boss.  Pretty strange that a pinball game has a end boss in it!  I of course could never even get close to a billion points, but via a password my Dad helpfully wrote in the back of the manual I can get to experience the boss, and the ending.  It takes place on its own table in a Throne room.  Epic boss music plays as you aim your ball at a man sitting on a Throne while bodyguards deflect your balls from hitting him.  After his energy bar has gone down a bit he stands up and rips off his skin revealing a cool lithe Dragon.  Fantastic!

Annoyingly the game was quite censored from the original Japanese version (named Devil's Crush I believe).  Pentagrams have been changed into red stars, and one bonus stage that saw you battling 6 wooden coffins marked with Crucifixes was replaced with one where you instead fought 6 yellow urns.  It's stupid how in those days religious imagery was really not welcome in videogames, and pointlessly censored.

I am forever grateful to my parents for getting me into videogames.  I just wish my Father had gotten into them more (as far as I can recall; this, and the point and click game The Dig are the only games he ever played).  Anyway, Happy Fathers Day Dad, you are a most excellent person!

My first game comes in a cartridge with my Megadrive (Sega Genesis in my country)
It was called Devil Crash.

And it's the same game that you posted but with the differences that you have mentioned.
I was 7 years old when i get the console.
That console was broken in some years but i still having the Devil Crash's cartridge in good state and working.
For me this game reside in a part of my heart too.

Thanks for the comment, glad you liked it, I think I may actually go play the game again now, still have my Megadrive hooked up to my TV in my bedroom :)