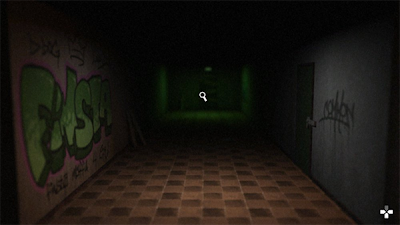 Decay: Part 1 was released on the  X-Box 360 Indie game channel a few months back.  It is quite a short, yet atmospheric Horror based point and click game that is 240 Microsoft points.

The short credit sequence focuses on a hanging body in a lonely bathroom.  After some blurred close up shots of the hanging persons eye the game starts.  You play as the hung person, no no longer hung.  The person has no memory of who they are, or even of hanging themselves.  The game takes place in a desolate derelict apartment building with boarded up doors, and graffiti strewn walls.  Their is no specific aim of the game.

The game is a first person fixed perspective point and click, much like games such as Myst.  You cannot move around, but instead can focus on different perspectives by clicking a button. To leave a room for instance you would click on the door.  You control a mouse pointer that you can use to click on objects in the environments, and pick up items, as well as read notes, and letters that are dotted around the apartment block.

The game is very atmospheric.  It features unsettling Silent Hill style piano music as it's score, and in many ways the game does feel like Silent Hill despite the static nature of the game.  There are quite a few simple but fun puzzles in the experience, these include things such as O's and X's as well as Silent Hill style puzzles (one such requires you to arrange portraits in order of family members).  The game features no combat or death, but has unsettling sudden noises, as well as messages that appear on walls, and objects creepily vanishing and reappearing in odd places.

The notes, newspaper clippings, and letters you find are all interesting, and well written, and never feel like they exist purely to give you clues to the games puzzles.  The game only took me about 15 minutes to complete, but was interesting and would defiantly like to play further chapters.  It is certainly a unique Indie game.  For 240 Microsoft points it is a good buy, while 80 Microsoft points would have been better, it's hard to grumble at these cheap prices.  The music is good, the graphics almost photo realistic at times, and is well plotted.