Class 3 Outbreak is a web based free to play real time strategy game that takes place using Google Earth, and involves the outbreak of zombie apocalypse.

You control up to three squads of Police who must fulfil various conditions while defending against zombies. There are two maps. One is set in Leicester, while the bigger of the two is set in Washington DC (UPDATE: there now appears to be a large variety of maps taking place at locations all around the world) . The whole game area is created using Google Earth. The police, civilians, and zombies all react to the flat images of Google Earth; they walk around cars and house, and objects, and when they go by trees they become silhouettes. 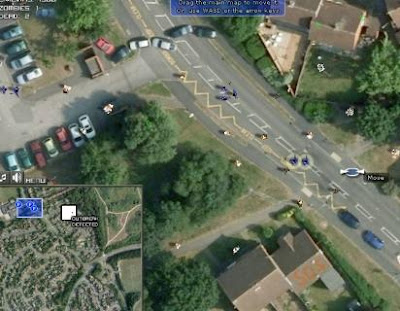 The game starts with your (up to) three squads investigating the emergence of a zombie apocalypse.  After a set time has passed a newsflash is shown which features a news reporter updating viewers on the growing emergency. Your goal after this is to secure scientists who appear on the map as symbols. Locate these and they follow you. Next after the outbreak intensifies you have five minutes in which you must locate a pilot, and then escape to the helipad and escape the area before the army nuke the place.

I played the game on Normal, it was very easy.  The police automatically shoot any nearby zombies.  While you can specifically instruct them to shoot targets I found there was no need.
Harder difficulties reduce the amount of police you get to control, as well as the usual making you weaker, and the zombies tougher.

All in all the game lasts from start to finish about 10 minutes. It was a fun distraction, but limited due to just the two locations. It would have been amazing if they had done a level set in Northampton (where I live).  It is clever how the characters react to the flat Google images, and a cool touch with cars being set up to look like they are blocking off roads and causing blockades.