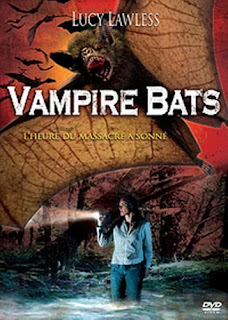 Vampire Bats is a horror film that fits into the genre I have named 'Creature Feature'.  A small American Town comes under attack from a plague of Bats.

At first it is thought that the bodies of random Townspeople turning up dead are the cause of a serial killer. College Biology teacher (played by Lucy Lawless of Xena fame) has another theory.  She thinks (and is proved right) that the murders are due to Vampire Bats.  The Vampire Bats have mutated due to some toxic waste and now have an extra set of fangs that lets them drain large amounts of blood.  Attacking in packs they are able to isolate stray humans and literally suck all the blood out thier bodies.  The mayor wants the Bats all killed, the Biology professor however thinks that by studying the Bats a better method can be found to get rid of them.

The film is quite low budget, it felt made for TV.  The acting is of an average standard, with some characters being totally awful.  The film is set around a College Campus so the cast is mainly comprised of younger characters.  There are some cool scenes involving hundreds of ravers under attack, and scenes of young couples getting brutally interupted as they try for some alone time. 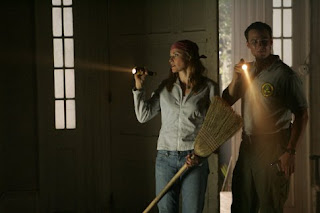 The Bat effects are quite bad.  For the most part the Bat swarm is all CGI, looking quite fake, in an obvious way.  Around half the Bat attacks in the film are shot from the Bats perspective making it cost effective, but quite funny seeing the camera rush at people who start screaming.  Close up shots of the Bats attacking people are quite well done, with puppets or animatronics or something used, leads to some cool moments, such as a drugged out party goer covered in bats as he lays unconscious on a sofa.

The plot is quite quite silly though.  The fact that a College Biology lecturer is allowed to perform an autopsy on one of her dead students is bizarre, as is the fact that when students close friends are killed they get over it really really really quickly.  Add to this some sub plots that vanish without being resolved (two College students being touted in the Newspapers as ritulistic blood drinkers), and sub-plots that just appear out of nowhere (the main female student suddunley hooking up with the classroom jerk at the films conclusion when there was not even a scene before this I can remember when they even spoke to each other).

The film despite these flaws is fun.  Sure, it is a silly film, and a cheaply made one, but it is entertaining, and only cost £2, so worth a watch if found cheap!
Posted by Daniel Simmonds at 10:34

thank you for the solid review!