Return of the Living Dead: Rave to the Grave - Zombie Horror Film Review 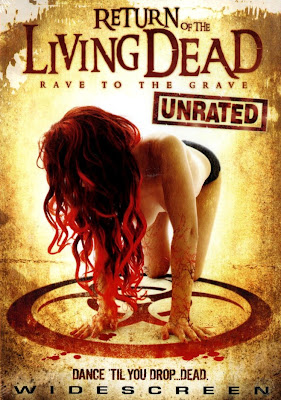 The actor who played Cody in the last film again resumes his role.  This time his creepy Uncle is killed off in the first five minutes of the film.  Investigating his house Cody and his Girlfriend come across a secret room where the final few ill fated canisters (the cause of the zombie outbreaks in the previous 4 films) are stored.  They decide to get their Science student friend (another character from 4) to find out what is in the canisters.  He discovers there is a liquid which has Ecstasy type qualities.  Assuring Cody he will look after the canister he instead uses it to make hundreds of hallucinogenic drugs he calls 'Z'.  Pretty soon zombies are popping up all over the College Campus, it seems who ever tries 'Z' eventually turns into a brain hungry zombie.  Two trigger happy Interpol Agents are on the case, together with Cody and company they head to a Rave where all Hell breaks loose.

The film has a different style to that of 4, but it is easy to see that they are related.  For one, as mentioned a lot of characters from Necropolis turn up here.  It's fun to see the evil Uncle get his comeuppance even if he is in a different reality.  Also one of the survivors from Necropolis is killed quite early on in the film. 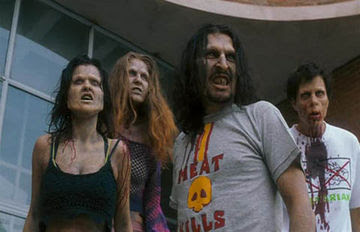 The film actually has a message this time; the evil of drugs.  I don't do drugs, but I'm far less likely to after seeing the effects they can have on people!  The zombies get lots and lots of brains, while the ravers mostly don't even realise they are being attacked until it's too late. The whole last third of the film takes place at this very crowded outside rave during Halloween.  Party goers are completely mixed in with the zombies, along with the loud music and flashing lights leads to complete chaos.  There is one excellent sequence shot in a pitch black room, illuminated just by strobe lighting, very classy!

The film has a lot of humour running through it, more so than Necropolis.  The two Interpol Agents play off each other very well, posing for photos with the canister they discover, and using extreme over kill on the zombies they encounter (for instance using a rocket launcher to take out a car full of zombies).  There is a lot of humour directed towards the zombies, such as numerous characters misunderstanding what the ghouls mean when they shout brains.

There are literally hundreds of cast in this film, far more than Necropolis, yet it seems that even less actors are able to speak English.  There are around seven or eight characters maximum out of a cast of hundreds who don't have thick foreign accents! Impressive.

The zombies do not look anywhere near as good as Necropolis.  Most the zombie makeup is just that; make up, a few have very poor looking latex effects.  I guess it can be explained in that all the zombies are made so by the 'Z' drug rather than other infection type, but still.  There is far more nudity this time around.  Seeing as the last film had none this is not surprising, but by the end of the film around ten different females have seen the need to whip their tops off at various points (including at least one female zombie, or zom-babe I guess!)  On the violence side of things there are numerous head chomps, a few decapitations, and a few inventive deaths (such as pens through both ears, drum sticks through the eyes! 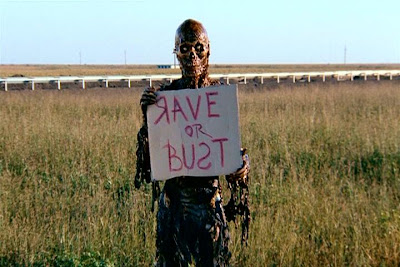 A enjoyable film, but I couldn't help but feel a bit let down after the greatness of Necropolis.  Still, a cool flick, a great rock soundtrack, and plenty of action.  Warning though; this film has the stupidest ending ever!

Posted by Daniel Simmonds at 16:24