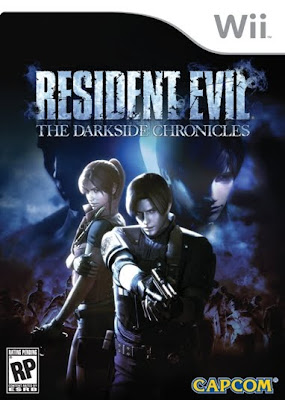 It has to be said that the Resident Evil Story has become totally jumbled up.  It doesn't help that the games have been set at random times, and often contradict each other.  This is the second on rails Resident Evil game for the Wii, the first being the excellent Resident Evil: The Umbrella Chronicles.

Umbrella Chronicles followed the stories of Resident Evil 0, Resident Evil, Resident Evil 3, and an original story set at a Russian research facility, as well as lots of bonus missions including some set in Resident Evil 2.  I always thought it strange that 2 was omitted, especially as it is considered the best of the originals.

Darkside Chronicles follows 3 separate stories.  In one you play as either Leon Kennedy or Krauser (bad guy soldier from Resident Evil 4) who are on a mission to stop a South American Drug Lord who has gotten his hands on various Umbrella made virus's; an original tale.  The 2nd tale is the story of Resident Evil 2, while the last story follows the events of Resident Evil: Code Veronica.

My main complaint with Umbrella Chronicles was the missions that followed previous games story lines.  Due to the on rails shooter aspect the games were cut into chunks, and lots of stuff missed out.  This was most apparent in the odd Resident Evil 3 mission that had near no relation to the actual game whatsoever.  This time around the 3 missions are more faithful, and less rushed.  Still, lots has been missed out as you would expect. 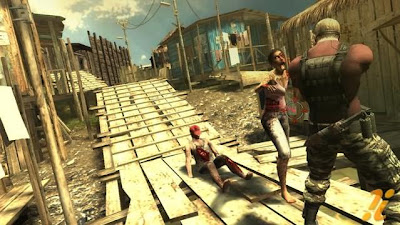 The South American storyline is set during day time, so there is kinda a Resident Evil 4/5 vibe going on.  This part of the game is cut up, with the Resident Evil 2, and Code Veronica games inserted between levels.  There are a lot of new enemies exclusive to this mission, which reminded me of Resident Evil: Dead Aim (that also featured lots of new enemies).  The story for this is ok, being set before 4 it kinda sets up some events (such as reasons why Krauser may have gone rogue).

Enemies as you would expect are mostly zombies, both female and male ones.  Also making appearances are bats, crows, dogs, plants, lickers, hunters etc.  New enemies are quite cool, including among there numbers (excluding new bosses) Bat-lickers, large insectoid grasshopper type beings, and piranhas (attack identical to those from House of the Dead 2!).

Resident Evil 2, and Code Veronica are better than their equivalents in Umbrella Chronicles.  Many of the bosses are much better than they were in the original survival horror games.  For instance, Nosferatu in Code Veronica is a much more exciting battle than the snipe fest it originally was.  Yet again by shooting various in game objects you can collect files, but yet again disappointingly many of these are recycled, with not many new files being available.  On top of files though you can also unlock enemy and character bios, as well as sound clips, objects, and awards based on how well you get through the levels. 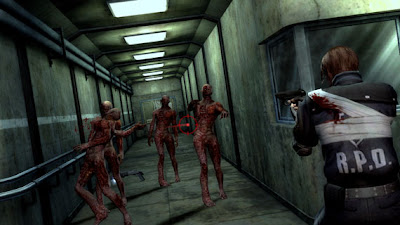 Weapons again can be levelled up by spending points to increase their stats.  One thing I was not happy with is that the game as a whole is a lot less diverse.  Umbrella Chronicles had a load of really fun bonus missions, usually 2 per main story.  These delved into unexplored areas (such as Ada Wong's escape from Raccoon City in Resident Evil 2) as well as gave Wesker his own story line spanning all 4 of the missions.  This time around there isn't any bonus missions. There are 2 extra stages you can unlock for the South American storyline, as well as a fun mode where you must escape Raccoon City while fighting off lots and lots of angry giant blocks of Tofu!

The game is not as good as Umbrella Chronicles, lack of bonus missions makes sure of that.  However there is more stuff to unlock, and with 5 different difficulties there is lots of replay.  I didn't get to try the game in 2 player, but from my experiences of Umbrella Chronicles it would have made the game at least twice as fun.