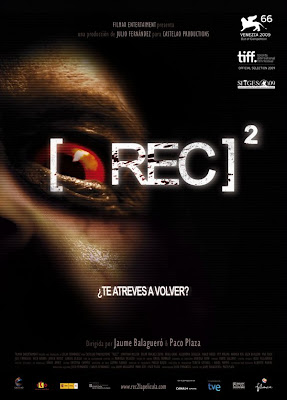 Rec 2 is the sequel to the cult classic; the Spanish horror film Rec.  The film takes place literally straight after the end of the first film.  Again it uses the Blair Witch style of 'found footage' to bring you right into the action.

After a brief sequence showing the end of the first film the action goes to a SWAT van were a small SWAT team are on their way to the doomed building.  Once there they are tasked with protecting a Government Agent who needs to enter the building and assess the situation.  However once inside things quickly go South (my new fave phrase) which is to be expected with a place full of psychotic plague victims (zombies).  While this is all happening a group of dumb teens (also with camera) think it will be hilarious to sneak into the apartment building to see whats going on.

The film is more fragmented than last time.  Each SWAT member has their own helmet mounted camera.  Their story goes on for perhaps a third of the film, then the film goes back to the start, this time showing events from the pesky teens perspective.  It's cool how it does this as sounds heard in the distance are now shown, so is clever how this was integrated.  Later yet another camera makes an appearance. WARNING; after the picture there will be spoilers, so if you have any interest in seeing this film then STOP READING! 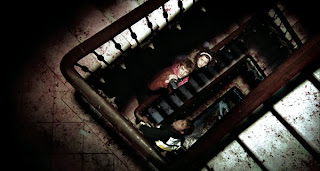 This film is still horror, but is no longer a zombie film! In a cool early twist it is revealed that rather than plague victims the virus being spread is actually Demonic possession!  The Government Agent reveals himself to be a Priest, and lots of Exorcist style praying, and possessions go on, making the film like a Blair Witch style Exorcist rather than a 28 Days Later style zombie flick.  The zombies are able to be stopped by exorcism rites.  This was a development I really hadn't expected.  While it was a bit disappointing to see the Zombies relegated to Demons this was well handled with the SWAT team at first thinking the Priest is mad, but coming to the realisation that what he is saying is real.

I had expected the film to be boring as it was set in the same location as the first, but it really wasn't.  There are lots and lots of references to Rec which was to be expected, but lots of zombies are still banging around from that, and some of the more bizarre later stuff is explained.  The fate of the reporter is also revealed, was cool to see her again!  The film is more violent, with obviously a much higher budget, and has some scenes that seem directly lifted from Quarantine (such as snipers shooting at survivors who go near the windows).

The film is the length of a normal film this time around, being near an hour and a half.  The film also has a much bigger dark humorous streak to it.  The fat zombie woman from Rec is still charging around, and the film seems to have a cheeky nod to how unkillable she was by again getting her repeatedly beaten only for her to comically reappear later on (while the other zombies for the most part die normally)  The teens have a lot of dark humour surrounding them also (such as a boy who finds a pistol, and then keeps accidentally firing it off every now and again).

The characters are cool, but never as likable as the lot in the first film.  The SWAT team are pretty faceless, though the way they react to the events that happen are believable.  The Priest on the other hand is annoying,  mostly for the fact that the SWAT team can only be evacuated by his signal, so he pretty much blackmails them into helping him complete his stupid mission.  The teens are really stupid and annoying, but it is pleasureable to see them collapse in panic as it is totally their fault they are in the situation.Unlike every other character who entered the building for noble reasons, or unknowingly, the teens purposely entered a building sealed off by the military as they somehow thought it would be funny to do so.

The film leaves a cliff hanger that totally sets up a sequel, though whether this actually happens or not who knows?  Well worth watching if you were a fan of the original.  Not as good, but then sequels generally aren't