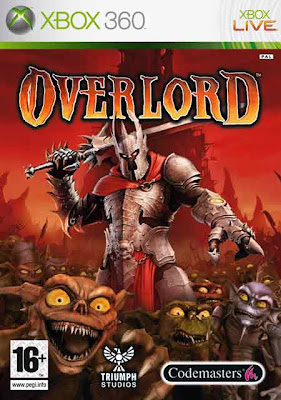 Overlord came out quite early in the 360's life, and so has a few technical issues that just wouldn't cut it today. Overlord is a humourous action/strategy fantasy game set in a very Fable-esque world.  It is also avaliable on the PS3, and on PC.

The game starts with you being resurrected by some faithful minions (gremlin type creatures).  You are an evil Overlord, sometime in the past a band of Heroes attacked your fortress, destroyed it and killed you.  As a newly resurrected Overlord your mission is to get revenge on the Heroes that killed you, as well as recruit minions to your cause. 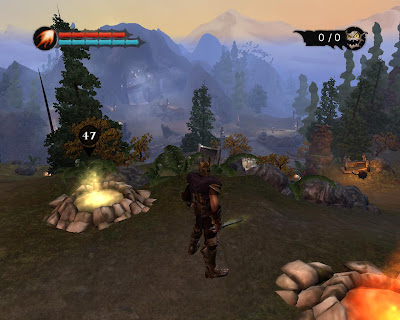 As mentioned the game takes place in a fantasy setting.  Everything is bright and colourful, and humourous.  This is not a serious game.  The character you control is a blank slate; a walking suit of armour, armed with either a club, sword or mace.  The Overlord himself is quite weak.  The game is based around Minions.  You get 4 different types through the course of the game.  Initially you can only have a maximum of 5, but this increases.  Brown minions are the basic grunts, they are good at combat.  Green minions are immune to poison, they leap on enemies to attack.  Red minions are fire proof.  They can throw fire balls, as well as walk on fire, and put out flames.  Lastely are the blue minions.  Blue minions can go in water, and they can also resurrect fallen comrades.  The main part of the game is correctly directing these monsters to best effect.  There are many basic switch type puzzles through the game.

The game takes in many locations.  Starting off with a hobbit village, later levels see you wade through dark swamps in the Elf kingdom, fight through the quary and halls of the Dwarfs, and destroy a zombie apocalypse taking place in a large Human City.  The enemies are varied and include a variety of insects, humanoids, and monsters such as Ogres, Succubus's, and Giant floating eyeball creatures.  There are a variety of boss fights throughout the game, usually involving one of the Heroes responsible for your original demise.  The Heroes have all fallen to the dark side, and by killing them you are actually making the kingdom a better place.  The Dwarf Hero for example has become obsessed with gold.  He has made slaves of the Elfs to mine for more of the stuff.

The game has many RPG elements.  Finding items in the levels rewards you with more options at the hub level of the fortress.  At the fortress you can craft new armour, and weapons, as well as buy decorations for the place, and level up the power of your minions.  Every so often you will come across a moral choice that changes how characters react to you.  One early example sees you with the option to either take a food store for yourself, or give it to some villagers.  If you are worshipped you get more gold, yet if you instead choose to kill people then you get more life force that can be used to recruit more minions.

The game is fun but does suffer from some performance issues, most notably there are quite long load times between levels.  The whole stratergy element of the game is quite watered down, but still I got in situations where my minions were getting themselves killed much faster than I could manage the, leading to some frustrating moments.  I have the sequal which I will play one day.  Hopefully it fixes some of the issues I had with the game. 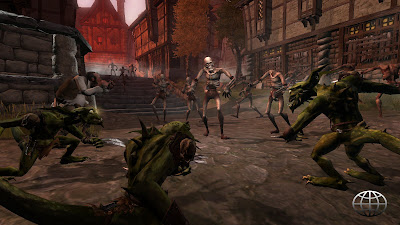 The game is quite long, taking me nearly 24 hours to finish, but is interesting throughout.  Just be aware that there is not a lot of fighting you actually do yourself.  You do get access to magic, but I found none of the offensive spells that useful.  It can also be a long process to visit previous areas to build up your minion reserves.  This becomes especially apparant towards the games end when I had to spend a good few hours basically grinding to build up my minion reserves.  Still; the game has lots and lots of zombies in it!