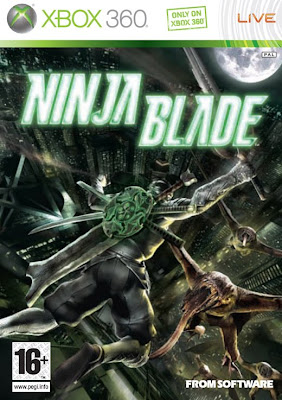 Ninja Blade is a action platformer brawler, much in the vein of Devil May Cry, and Ninja Gaiden.  Unlike those Ninja Blade is far more accessible, and dare I say it fun.

Basically Tokyo has become the centre of a biological attack.  Parasitic worms that are able to infect people and mutate them into monstrous beasts have invaded the area, and so downtown Tokyo has been evacuated.  You play as Ken Ogawa who along with a squad of highly trained Ninja Warriors has been air dropped into the area to destroy the parasites.  Things quickly turn sour as the squad leader Kanbe Ogawa (Kens father) and one of the squads most skilled warriors Kuroh Sakamoto turn rogue; butchering the entire squad before heading off into the night leaving Ken for dead.  Ken is rescued by the squads Director Michael Wilson, and now Ken is tasked with destroying the plague all by himself.  If he fails then Tokyo is to be obliterated to contain the breakout.

The game is very fun, and accessible.  Ken is a joy to control.  He is armed with three types of sword; a basic sword, a quick weak sword combo, and a heavy stone sword that can destroy armour.  The quick sword can also be used to grapple onto specific buildings, and the stone sword is able to destroy certain types of wall.  Ken also has magic in the form of elemental shurikens.  He has a lightning based one that can electrocute enemies, a fire based one that can set enemies on fire, as well as destroy obstructions, and finally a wind based one that can put out fires.  Ken also has access to Ninja Vision which is basically bullet time.

Levels are quite varied despite all taking place in Tokyo.  There are lots of levels set on the rooftops, but also levels on a motorway, sewers, office block, and subway.  The levels mostly consist of 3 main parts.  The platforming part sees Ken traversing the crumbling landscape, he is able to do classic Ninja wall runs, as well as swing on poles, and run up walls.  The next part of the levels are the enemy encounters.  For the most part you face various types of mutated zombie like humans.  Some have stone shields, others have sharp claws, and others still fire projectiles at you from a safe distance (though you are able to hit the projectiles back at them).  QTE's are the third main type of game.  Quick Time Events are littered heavily throughout the game.  The first thing you do in the game involves a QTE, as does the very last thing.  For the most part they are quite easy, and the buttons correspond to what you are doing on screen.  You do some crazy things during QTE's such as riding a motorbike up various vehicles, objects, and pavement thrown at you, and leaping from point to point on a collapsing tower.  There are also on rails sections where you take control of a gun either in an armoured van, or on a helicopter, these are quite fun. 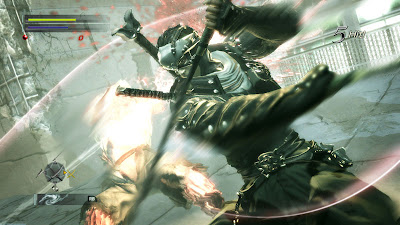 For the most part bosses are what you spend most your time fighting.  Usually the boss will turn up at various points in the level causing havoc before retreating.  One level sees you chasing mutated Yakuza bosses along a highway, another sees a giant stone golem ripping apart a building you are in for instance.  The bosses are real fun to fight, usually gigantic.  Either monsters, or more human like mutated humans, all are defeated by initiating a final QTE attack.  There is a bit of blood during the game, but for the most part enemies evaporate in a rush of yellow orbs (orbs can be collected to upgrade your weapons, as well as get back health and magic).  A special shout out most go out to the fabulous giant armoured spider, that is killed by giant wrecking ball, and later in the game by a massive industrial fan, very cool!

The games plot is barmy, and completely stupid and over the top, yet the game takes itself very seriously that adds to the charm.  Weather you are fighting zombie helicopters (for real!) or gigantic worms the characters of the world act 100% seriously.

The game is really fun, and a much more enjoyable alternate to the brutally hard Ninja Gaiden.  With lots of items, and clothes hidden throughout the game world there is a lot of reasons to come back to the game.  It is also quite cheap now!

Posted by Daniel Simmonds at 06:13