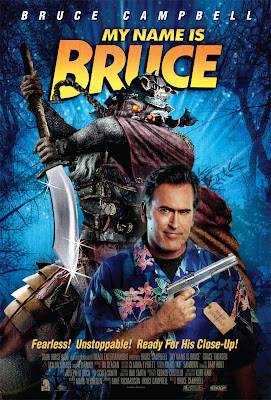 My Name is Bruce is a horror comedy starring the legend Bruce Campbell (from Evil Dead fame) playing himself. I had wanted to see this for ages, as Bruce Campbell is a really funny guy in my opinion, so a film where he is portraying his real self as a jerk sounded fun.

Guan-di; a Chinese protector of the dead has been accidentally resurrected by a group of teenagers in the small redneck Town of Gold Lick.  Convinced that Bruce Campbell is the only man able to stop the demonic force a super fan kidnaps Campbell.  He is convinced the whole situation is just a birthday prank though, but soon discovers that this time the horror is real. 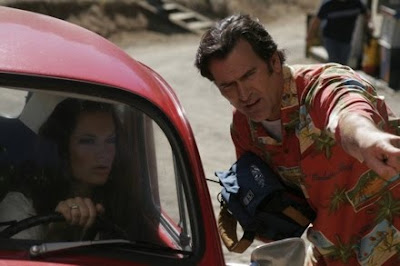 This film is terrible, which is a damn shame.  It was straight to DVD anyway, but that doesn't excuse the frankly worst acting I have seen in a long long time.  For about half the film I thought that perhaps this bad acting was intentional, but came to the conclusion that no it wasn't. It's somewhat telling that the film within the film (a dodgy sci-fi called Cavealien II) actually has better acting than the main feature.

I love Bruce Campbell in the Evil Dead films, as well as Bubba Ho-tep, and the commentary for those films proved him to be really funny in real life as well.  In this film he is just terrible though.  I don't know if it's just due to the bad script, or if it was really believed the way he portrayed the 'real' him was hilarious, but no, terrible.  The film used a lot of local Oregon based actors, they all seem ill suited to a feature length film, looking quite awkward for the most part. 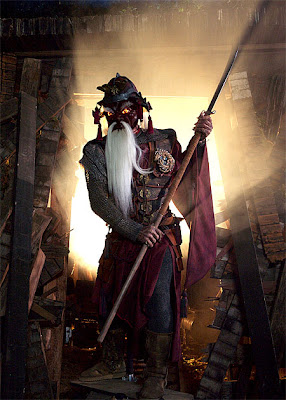 The movie monster Guan-di looks quite cool, but only appears in dark scenes, back lit by lightning, and doesn't really do much truth be told.  There are a few action sequences, but for the most part it's a manic yet strangely sedate film also.

The saving grace for the film is the extras.  There is quite an amusing hour long making of documentary which has amusing interviews with the cast and crew.  The making of is actually more entertaining than the film.  Other extras include quite a few mockumentrys about Bruce, as well as trailers for both My Name is Bruce, as well as a trailer for Cavealien II; the film within a film.

While I'm not too sure I think much of Campbell's directing I still hold out hope that the sequel (currently titled Bruce VS Frankenstein) will be much better.  The film just did not have humour I could identify with, just come across as zany for the sake of it.  This along with the dreadful acting just led to a film that I could never get into, or really enjoy.  A damn shame.

Posted by Daniel Simmonds at 09:28