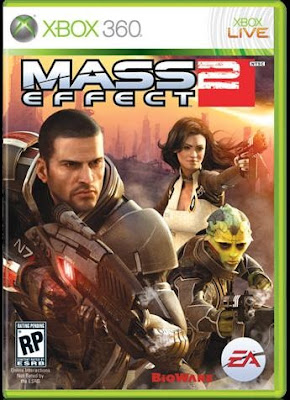 I'm actually listening to the Mass Effect 2 Soundtrack as I write this.  All the way through the game I was thinking how great the music was, so picked it up off of i-tunes.  Mass Effect is of course the sequel to the wonderful Mass Effect.  The makers have listened to the criticisms of the first game, and so a lot of stuff has been changed around.

A minor spoiler first of all, though this event does happen at the very very start of the game.  A few weeks after the Reaper attack of the Citadel Commander Shepherd is helping to mop up the remnants of Sarens army when her (or his) ship the Normandy comes under attack from an insanely powerful and mysterious enemy.  The Normandy is completely obliterated, and with it Commander Shepherd is killed.  Two years later you awake to find you have been reconstructed by scientists of the shady pro-human Cerberus group.  Human colonies have been attacked by some mysterious force.  Thousands upon thousands of human colonists have vanished.  The Citadel is in a state of denial, and refuses to accept the reality of the Reapers.  You must team up with Cerberus to discover what this new threat is, and put a stop to it. 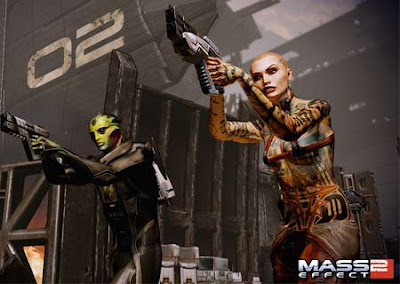 This is one amazing sequel! From the very start the story is faster paced, and more exciting.  People who have completed Mass Effect are able to import their character over, this means that all the many decisions you made in the first game also carried over.  For example, one big example is the fate of the Citadel Council.  At the end of Mass Effect I chose to ignore the Councils plea for help, and focused my attention to the attacking Reaper.  As a result Humans have a much bigger part in the new Council, and the new Council themselves dislike me.  If I had saved the Council then the plot for the start of Mass Effect 2 would have been different.  There are lots and lots of such instances through out the game, even minor choices you made are carried over.

As mentioned, a lot of the faults have been ironed out.  Weapons, and items were a hassle in the first game as they were everywhere, micro management for the items was bulky, and cumbersome.  Now that has been very streamlined.  You only have the one Armour, and a limited number of weapons (that now takes clips rather than infinite ammo).  These can be upgraded via research done on the new Normandy (much bigger than the original Normandy, with more to do).  The vehicle sections have been plain removed.  The cruddy tank vehicle of the first game was kinda annoying, so that's welcome.  Some DLC includes some vehicle missions, but as they are built around the use of the tank thing they are fun.

Missions themselves are much more stream lined and focused.  The mission starts at the action phase, rather than having to find the location first.  I did feel that many of the missions were a lot smaller, and bite sized than some of the epic missions of Mass Effect.  There are lots of non-essential missions, but it is the main quest missions, and Loyalty ones that are the most involved and fun.

The whole game is geared towards going on a suicide mission at games end.  To do this you are required to scourer the galaxy to get the very best squad.  There are 12 characters you can recruit for your squad, a dirty dozen feel to proceedings; each squad member brings something different to the table.  Again you recruit various Aliens to your cause; Humans, Quarians, Krogon, Salarians, Turians, and Asari as well as some surprising others.  These cover a wide range of types such as Dr's, Thief's, Assassins, and Mercenaries.

Optional, but highly recommended main missions are the Loyalty missions.  Each person who joins your squad has their own personal goal they wish to achieve.  Once this has been achieved the character becomes 'loyal' increasing the teams chances of survival during the suicide mission (it is possible for all your squad, including you to die on the suicide mission for real).  The missions are diverse, and mostly cool.  One sees you hunt down a Mercenaries traitorous ex-partner through an exploding factory, another sees you help a thief infiltrate a business mans party and steal secrets from his highly protected safe.

The game is much more gun focused, and the shooting sections are a lot more fun than previously, the game works really well with the firefights.  All the usual suspects return from Mass Effect (Geth, now reduced to a minor role, Pirates, Slavers etc) as well as new enemies.  There are 3 main dodgy mercenary groups - Eclipse, the Blue Suns, and the Blood Pack, as well as the fearsome bug like collectors, and the dumb, scavenger type Vorcha.  Robots  become quite a common enemy also.

The game takes place outside Citadel jurisdiction, so everything is much more grimy, and dark than Mass Effect.  The game reflects this with Shepherd able to do some truly nasty things to people she encounters (the good/bad choices return from Mass Effect), and the game features a lot more swearing, and shades of grey. There are a lot more Towns now, where in Mass Effect you had the Citadel you now have a shady space station 'Omega' as well  as the Krogan home world, and an Asari planet.  The Citadel is also featured, but the area in it you can visit is much reduced to that of before. 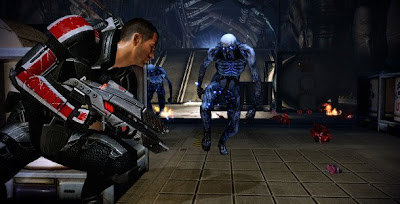 Again zombies appear in the form of Husks; humans turned into mindless cybernetic drones.  There are several times where you come under attack from hordes of Husks.  New types of Husks feature such as the Abomination that explodes when shot, and large Husks made up of fused humans that actually have weapons.

The game looks fantastic, and has a brilliant soundtrack.  The missions are real fun to do, and the suicide mission itself is suitably epic.  The dialogue is plentiful, and quite funny in places, the dialogue wheel is just as good as ever.

A very good game, longer than the first, and with lots more DLC planned can only get bigger.  If you have not played Mass Effect then you really do need to before playing this.  The world just feels so alive.  Amazing!

Posted by Daniel Simmonds at 03:34