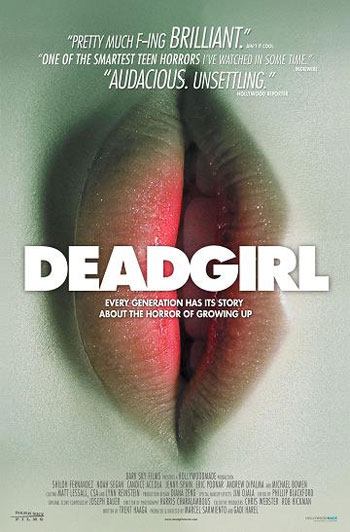 Deadgirl is certainly an original zombie film, I will give it that.  It is also well made, it's just that it requires you to accept it's massive plot holes which if thought about could ruin the whole thing as they are very big holes indeed!  The film features such bad topics such as rape and necrophilia, or rather a collection of the two that I have termed Necro-rape.

In this yarn two 17 year old school kids are truanting from school.  Due to the hot weather they decide to go to an abandoned mental hospital where they get up to some hi jinks before being chased by a wild dog down some tunnels where they come across a well locked room.  Inside they find a girl covered in plastic and chained to a table.  One of the boys - Rickie (a dead ringer for a young Joaquin Phoenix, or maybe Gerald Way) is quite unsettled and wants to free the girl and escape as he thinks that whoever put the girl here may come back.  The other boy; JT instead decides that as the girl is naked (forgot to mention that) and locked up in a place no one knows about that they should take advantage of the situation and have their way with the attractive (well moderately pretty) prisoner.  A scuffle breaks out and Rickie storms off wanting nothing to do with JT's sick idea.  The rest of the film is centered around the room the girl is in, and the sordid acts JT and friends do to the girl, while Rickie wrestles with his conscience and has a sub plot involving a high school girl he has a crush on.  Memory like a goldfish! Sorry, the chained girl is also a zombie and cannot be killed, and she is able to infect others through biting.

Rape is a central theme of this film.  JT initially discovers the girl is dead after snapping her neck while trying to rape her.  After he finds out she is a brain dead ghoul he sees nothing wrong with treating her like a sex slave, and treats her as if she is an object to be used for his and his friends amusement.  Reasoning that they are not actually raping the creature as it is not alive he has no qualms in descending into sordidness (later in the film he has somehow acquired a smoking jacket, and arm chair which completes his disgusting sordid image).  The character of Rickie is very flawed.  Rickie having been best friends with JT most his life cannot bring himself to report the situation (not that I think he could as the town seems to have a non existent police force; more on that later).  He is sickened by his friends actions, and wants nothing to do with it, though keeps visiting the room in efforts to free the dead girl, and to convince JT to come to his senses.  Overall Rickie is just a coward, too scared to stop what he knows is wrong, and getting shades of stuffing knocked out of him by the high school jock whose girlfriend he coverts.  It's only when he is forced into action that he can actually act in a reasonable way, and then it is for just selfish reasons, as the ending reveals.

The zombie girl is different to other zombies in that she is not totally brain dead.  She cannot talk, but seems to understand some speech, and is visibly upset whenever she is abused, struggling at her bonds, and gnashing her teeth.  She also seems to recognise that Rickie is trying to help her.  Her wounds don't heal, but her skin isn't rotting, making her seem almost human if not for the blood red eyes, and sharp teeth. 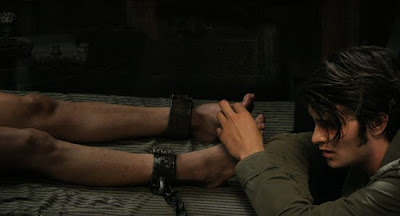 The acting is really good for the most part, the two jocks coming across as quite stereotypical, but most the characters feel quite real.  The film does ask you to accept that someone finding a chained girl would decide to keep her rather than free her or alert the authorities.  The film builds up nicely and subtlety leading to a natural blood soaked and ultra violent ending.  The soundtrack throughout is perfect also, reminding me a bit of Donnie Darko with the style.

There are some problems with the film though.  One of which is the amount of quiet talking.  The character JT is really hard to hear a lot of the time as he damn near whispers all his lines.  The film has major plot holes.  There seems to be no police in the town, with a huge amount of missing people, the ending in particular just collapses if you think rationally about the events.  JT and his Jay-like friend concoct a ridiculous plan towards the films end that is just stupid, and goes so far past their necro-rape obsession, yet they don't even seem to consider their actions.  Lots of plot holes; eg: how did a wild dog get into a heavily boarded up mental asylum in the first place? 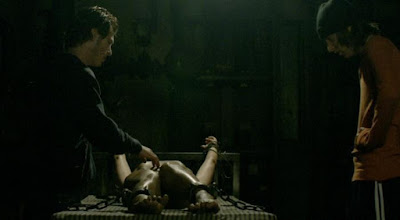 The whole film could be seen as an analogy for teenagers hormonal changes; how males just see females as lumps of meat, and their twisted ideas of what it is to be grown up.  No character comes out clean.  Even Rickie's love interest; a seemingly sweet girl is content to date an obviously awful, bullying jock, though it is nice to not see the usual love story angle, in that the girl is legitimately unattainable for the coverter no matter what he does, or wishes.

A good film, obviously a bit of a dodgy subject, but reflecting back, it was a unique ride.  Certainly not a cheerful film, but reminded me of specks of some of Shakespeare's flawed hero tales such as Hamlet.