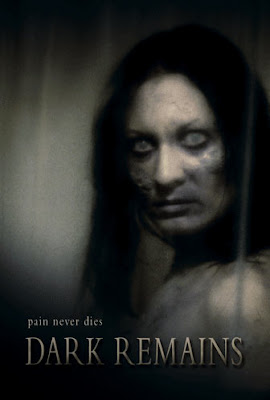 Dark Remains is an American ghost film, made in 2005.  It has somehow won two different awards for best horror film.  The film is cheaply made, but does look good.

It starts with a montage of two people committing suicide; a man shoots himself in the face, while a woman slits her wrists whilst in a bathtub.  Next we see a young couples child being brutally murdered.  The couple; Julie (Cheri Christian), and Allen Pyke (Greg Thompson) have moved to a cabin in the middle of nowhere at the top of a mountain. Allen hopes the change of location will help his severely depressed wife recover from the incident, while for him it is a chance to escape the city (various people think that he murdered the child, and his wife herself blames him as she reckons he accidentally left the front door to their apartment unlocked).  Soon after getting there a series of supernatural events happen.  Doors open and close on their own, and Julie is able to see the body of her dead child in photos she takes (she is a professional photographer).  As Julie becomes more obsessed with the mountain Allen starts to research the mountains past, and discovers a unusually high number of deaths and suicides in the area over the years.

This is very much a ghost film, and brings to mind the Japanese style of ghost films.  The ghosts are angry spirits, and seem to openly hate the living.  As such they look similar to the Japanese ghosts, especially the ghost of the lady who died falling down some stairs who crawls around crab like much like the woman from The Grudge.  There are quite a few different ghosts, all attracted to the mountain, most specifically the couples cabin, as well as a nearby abandoned prison. 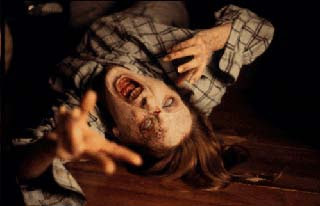 The scary effects are for the most part quite lame.  Most the creeps coming from suddenly opening or shutting doors, and ghost wandering around in the background, or appearing in reflections from mirrors.  The ghosts who appear in Julies photos are the best, which leads to an ace part when Allen flicks through all the photos Julie has taken (which up to that point had been shown ghost-less).  Despite being scary looking the ghosts appear quite powerless, needing to possess people to get them to do anything.  It's a cool idea that only unhappy people can see the ghosts.

The acting is quite good, Julie in particular as the very depressed wife sleep walks through her role, but that's how her character is supposed to be.  The local rednecks are cool, if lacking in screen time, the character of Allen is probably the weakest, as he does come across as quite annoying.  The film is never really scary, a few goose bumps, but for the most part it fails.  The plot is basic, but has some interesting, if not particularly exciting twists to it.

Not a bad film, and reminded me of Cursed Mountain; a Wii Survival Horror game that I have yet to play, but hope it's like this film.  The film is an 18, but am not really sure why.  The film is also quite triggering with people cutting their wrists in bloody fashion.

The DVD has over 2 hours of extras, but I wasn't that interested in the film to watch any of these.

Posted by Daniel Simmonds at 09:18