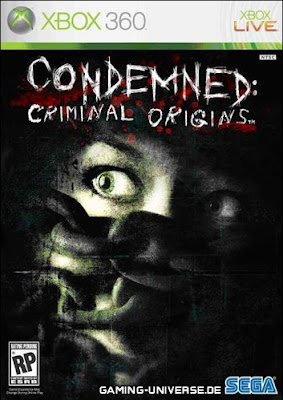 I can honestly say that this is one of my favourite videogames ever.  I utterly love this game!  It was one of the launch titles for the 360, yet is still an amazing and terrifying game, and highly atmospheric.

You play as Ethan Thomas; an FBI Agent who is part of the Serial Crimes Unit. The game starts with you and some fellow officers investigating a crime scene involving a victim of a serial killer known as 'The Match Maker'. Things soon go south as your fellow officers are murdered and you are framed for their deaths. Now on the run from the police you are on an urgent mission to track down the real murderer and clear your name. 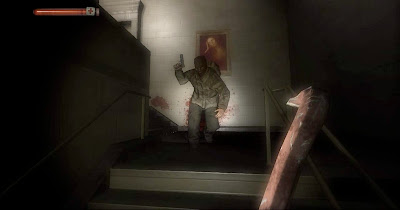 The game is played out in first person, but is not a first person shooter. Instead the game is a first person brawler. You must use the environment around you as weapons. For the most part iron bars, planks of wood, and fixtures will be your main weapon as you take on the degenerates of the grim city the game takes place in. Enemies for the most part consist of murderous druggies, and psychotic tramps. In their rage they wildly swing their weapons, and just as eagerly fight each other as fight you. The enemies have real urgency and madness to their attacks. They shout and taunt you from the shadows then rush out swinging wildly. They use feints to make you vulnerable, they run off and hide in ambush, they are really insane.

The locations are what makes the game so damn scary. As the title suggests the game takes place in purely run down, abandoned, and condemned buildings. Starting off in a quite bland apartment building locations soon get really good. A gutted library, a boarded up high school, a large department store kitted out in full creepy Christmas getup all ooze atmosphere. You are armed with a flashlight for the games duration. You really need it, as turning it off makes the levels pretty much legitimately pitch black. The game for the most part is silent, no background music at all. The subways give you the distant rumbling of trams, while the department store features distorted Christmas music pumping out the ruined speakers. 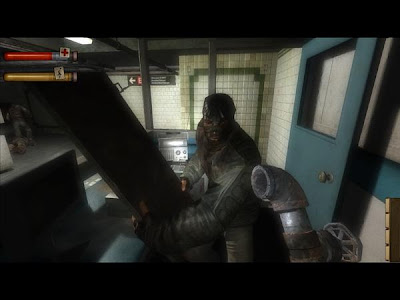 The story is utterly compelling. Your initial chase of the cop killer (who comes to be known as Serial Killer X) through the sewers is fantastic as you gradually track down clues to his identity, and hideout. You have help in the form of a suspicious old man called Van Horne who professed to know your parents, as well as Rosa; a fellow FBI Agent who helps you via mobile phone for the game. The story has intelligent and logical twists, yet never truly explains anything, leaving you confused, and wanting to know more. Cryptic snippets of seemingly unrelated info are provided during the level loading screens, and during the levels there are dead birds, and plaques of metal you can collect for achievements that also are somehow related to the main plot.

The game isn't all action though. Levels have some basic puzzles. Some doors cannot be opened unless you have the right tool. Some doors require a fire axe to smash through, others are padlocked and require a sledgehammer to destroy the lock, while other gates and doors require crowbars, and spades to get through. Every so often you will come across scenes of interest which sees you enter exploration mode. These only require you to get in the correct position and press X, but feature a variety of different things such as taking photos of clues, or using a UV light to trace blood stains and follow them to progress. 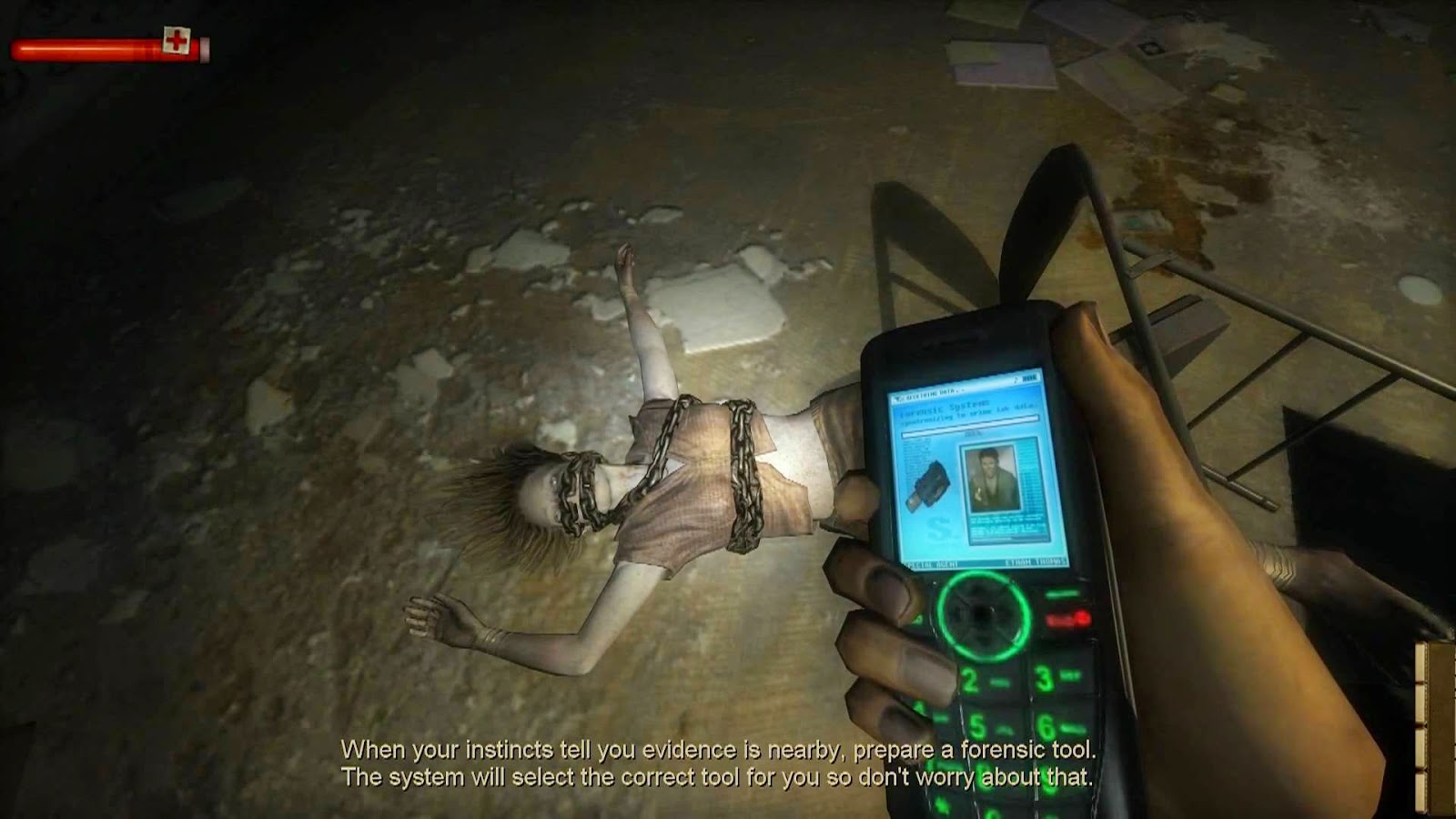 The game has a hell of a lot of weapons you can use. Everything from mannequin arms to paper cutters can be used as weapons. All connect with brutal sound effects, and get covered in blood, they really sound vicious. Guns also feature but in very limited amounts, and usually in the arms of enemies. For the main part guns consist of pistols and shotguns. They have very limited ammo, and there is not spare ammo laying around anywhere making them like gold dust. You are also armed with a taser that can be fired once before needing to recharge. Tasered enemies get stunned giving you a few seconds to snatch their weapons off of them.

The game also has a supernatural angle to it. Frequently the game will change to black and white as Ethan gets premonitions, or visions of past events, and imaginary murders. It is never clear if this is real, or part of Ethan's mind. You are frequently tricked into attacking non existent enemies, and walls and doors changing places. Later levels the enemies get less and less human like, they skitter along on the ground like crabs, and have odd metal objects stuck in their flesh, perhaps reflecting the characters deteriorating mind. 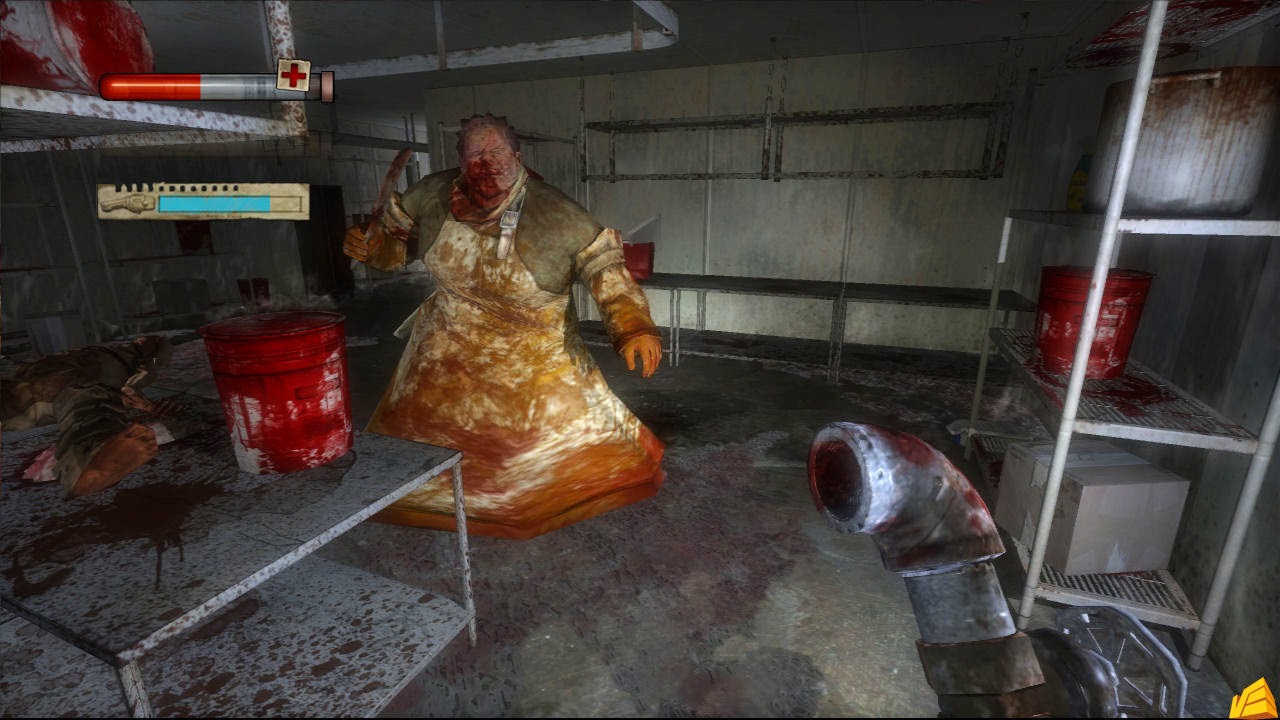 I really really love this game, it is fantastic. The sequel Condemned 2 was a huge disappointment to me, but I will soon give it another try.  The problem I had with the sequel was it knowingly tried to be scary, and explained far too much of the plot, somewhat ruining the mystery of Condemned in the process with it's kooky X-Files style shenanigans. Condemned is a must buy, and is one of the scariest games I have ever had the pleasure of playing. Essential.