When I was a teen I briefly owned an Amiga, the games I had on that included Alien Breed 1, and 2.  These were overhead adventure games in which you were a soldier working your way through a base fighting what looked suspiciously like the creatures from the Alien. Each floor of the base was made up of lots of rooms and corridors that you had to work your way through. I remember it being really hard as the enemies were very numerous.

Alien Breed Evolution on X-Box Live Arcade is a remake, or rather a rebirth for the series. The ship you are a passenger on; The Leopald (I think) comes out of hyperspace only to crash into a gigantic derelict space hulk that hadn't shown on the scanners. Your ship is firmly wedged in the side of the hulk. To make matters worse it seems the hulk was home to millions of insectoid aliens. Now they have invaded the Leopald and are killing everyone in sight. To make matters e-v-e-n more worse both your ship, and the space hulk are on a collision course with a nearby planet. As veteran soldier Conrad you must follow the instructions of a robot to restore stability to the ship, and to extradite the ship from the hulk. 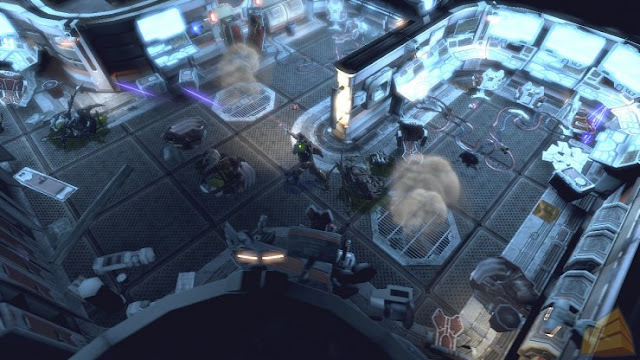 The game is an isometric 3D action adventure game. Each level is set on a different floor of the ship and involves you doing a shed load of menial tasks to restore power and systems to the rapidly collapsing ship, while fighting off hordes of aliens that burrow out of the ground and climb out of the walls. The game was made using the Unreal Engine, so it looks really good, again proving how versatile the Unreal Engine is. Lighting and shadows are fantastic, the explosions, electricity, and objects really bring a sense of reality to the ship, it feels like your on a real spacecraft (one with absolutely no toilets nonetheless)

There are quite a lot of aliens, but to be honest they all look pretty much identical. As well as facehugger type critters (complete with pods they crawl out of) there are human size enemies that mostly attack by charging you. You have an Aliens style scanner in the top right of the screen, you will spend a heck of a lot of time keeping one beady eye on this for the tell tale red bleep that indicates a incoming enemy. Instead of all their bizarre real time strategy, and first person shooters the holders of the Aliens licence should really make a game in this style, as this is one of the most Alien like games I have ever played.

You have access to quite a few weapons. As well as an infinite ammo pistol you also get a machine gun, rifle, shotgun, laser gun, and more. Frag grenades and stun grenades show up in your secondary items, as do sentry guns, and first aid kits. The aliens die in satisfying piles of goo.

The story is pretty weak during levels, though is some entertaining comic book style exposition during levels. There are logs hidden through the game, but rather than have story these disappointingly just provide information on the various enemy types. There are non player characters that appear in levels, but for the most part these are there only so that you can see them killed in various ways by the aliens with no chance to save them. 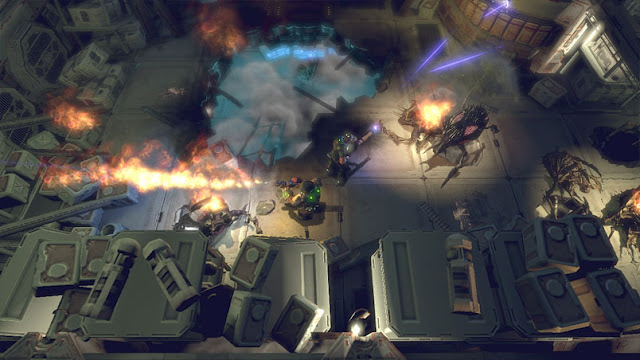 The game is two player, but as usual I don't have any friends to play this mode with. I can guess it would probably be quite fun in two player (update: I once tried this in two player but my friend had no idea what he was doing which led to frustration). The game can get a bit samey, only the last level really has a different look, and you spend most the game taking out the enemies in the exact same fashion.

Alien Breed Evolution was real fun though, it is just the first part of a trilogy so ends on a cliff-hanger with the story not complete. The game took around 5 hours to do, so for 800 Microsoft points it isn't bad (if it was 800, I can't recall). Sci-fi horror done well then, I look forward to episode 2.