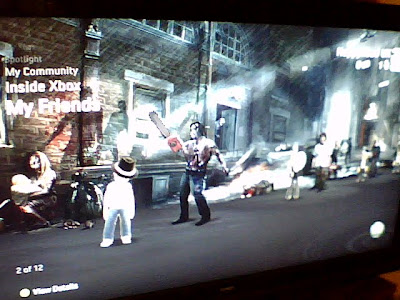 It seems that April is Zombie month for the 360 (in the UK at least).  Under the heading '30 Days of the Undead' they have a section featuring zombie stuff.  This includes links to the On Demand games of Stubbs the Zombie, Resident Evil 5, and Dead Rising.  Also there are links to two Indie games I MAED A GAM3 W1TH Z0MB1ES!!!1, and Yet Another Zombie Defence Game.  Other stuff includes a link to the ace Castlevania: Symphony of the Night, discounted Left 4 Dead map packs, and a competition to win a trip to Ozfest.  Good they are getting the greatness of zombies out there.

To coincide with this, there is a new Premium Theme for the 360.  This is titled Realm of the Undead Premium.  The theme (which I have so inexpertly took a web cam photo of) features a rainy street scene with zombies just hanging out.  Theres a zombie female with a zombie baby, theres shadows of zombies, and meandering zombies.  Each Friend section has its own 3D picture.  These range from a crawling zombie baby, to rats, limbs, fat zombies, and a zombie with a chainsaw.  It costs about 240 Microsoft points which is a waste to be honest.  Everything zombie based I get though!
Posted by Daniel Simmonds at 13:10