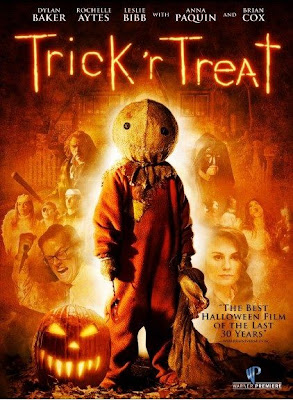 I had heard great things about Trick r Treat, so picked it up quite cheaply.  Instantly it falls into the films you MUST see during Halloween.

Trick r Treat is a Portmanteau (think Creepshow, or Tales from the Crypt).  There are 4 short stories that all take place in a Town celebrating Halloween.  In one a serial killer decides to use Halloween as a disguise to commit murders.  The 2nd story sees a bunch of kids who decide to play a cruel trick on a local retarded kid.  The trick goes horrifically wrong.  The third story concerns a virgin girl dressed as Little Red Riding Hood who is heading out to the woods to go to a private party. The last story concerns a bitter old man who hates Halloween, and is paid a visit by the Spirit of Halloween.

The film succeeds so much mostly for how clever the stories are interwoven.  The stories all take place on the same night, in the same area.  Characters from other stories appear as background characters.  Key scenes from some stories are shown in the background of other stories.  The whole plot takes place chronologically, each story slightly overlapping with the one before and after it.  It is really clever. 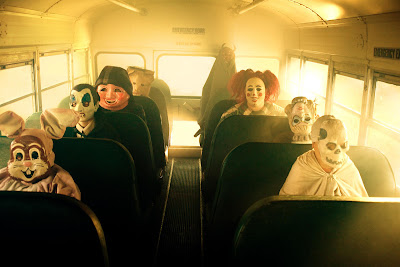 Due to this overlap the film feels really tight, and planned very well, and is very Halloweeny.  There are literally hundreds of Jack o Lanterns through out the film, they are everywhere.  This is probably the most Halloween based film I have ever seen (yes, even more so than John Carpenters Halloween!).  If it seems I am waxing lyrical about this film, then you would seem right! I under-estimated how fun this film would be.  It's horror, but done in a fun way, it's a film that acts like a film.  There are wonderful comic book pages interspersed throughout, much in the vein of the classic 80's Portmanteaus.  The start and end credits are especially well done, a fantastic ending also by the way.

The acting is of a high standard, and the effects are really good.  It is nice to see traditional effects done for a change, and not crappy CGI.  The film was released straight to DVD, though hadn't intended to be.  It is a cult classic, and I can definitely see why.

One key character I haven't mentioned is that of Sam.  Sam is a small child like creature wearing red all in one pyjamas, and a sack over his head.  He appears in all the tales observing from the sidelines, as well as turning up for a lead role as the Spirit of Halloween playfully stalking the cranky old man that hates Halloween.  He is a fantastic character that despite never speaking makes such a lasting impression as a cool iconic character.

I have heard that a Trick r Treat 2 is being planned.  I really hope that happens.  I have not really discussed the separate stories much as I want to avoid spoilers.  One thing I will say is that there are zombies in this film!