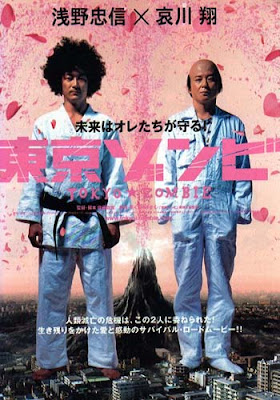 After Dead and Breakfast I must say alarm bells rang when I saw 'The Japanese Shaun of the Dead!' on the cover for Tokyo Zombie.  Tokyo Zombie is one odd film, in places bizarre, in others zany, sometimes even funny.

Two friends work in a Fire Extinguisher factory.  These are both stupid people, they spend most their time practising Jujitsu on each other.  The bald, older of the two is an expert in it, while the younger one (with an impressive Afro) is his student.  The film is set in a near future time.  The factory is at the foot of a man made mountain called 'Black Fuji', it is composed entirely of rubbish.  Murder seems less of a crime in this time, as many people dump bodies at the mountain, as well as normal rubbish.  Due to a combination of toxic waste, and 'the souls of rejected household objects' the dead have came back to life.  The two men decide they will use this apocalypse as a reason to head to Russia 'where the real strong men are' to become Jujitsu experts.  However things don't go to plan, the bald man is bitten by a zombie and runs off convinced he is going to turn, while the Afro man forms a hostile alliance with a moody woman.  5 years later the Afro'd man and his woman are slaves to a bunch of rich people in a fortified complex.  The man with the Afro fights in a zombie fighting contest in a bid to win his freedom, and show the world the power of Jujitsu (having become an expert during the 5 years).

The film has a very odd Japanese comedic feel to it.  Often comedy sound effects are used for no reason, and the comedy is bizarre.  The comedic themes run around men perving after younger females, couples fighting each other, and paedophilia which feels a bit wrong, but then that is the Japanese type of humour.  There are some funny parts though, the 2 stupid men play very well off each other, and the Afro mans odd relationship with the woman also comes off well. 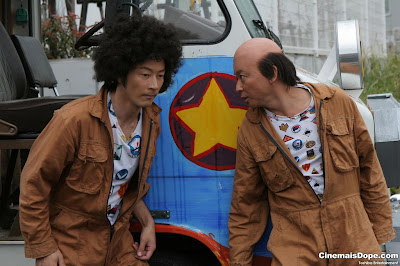 A lot of the effects are CGI based, at times looks terrible, but for the zombies is not so bad.  The zombies are mostly the typical shambling types, but they can also fight normally.  The 2 men easily fight off the zombies without even trying much.

The film has a weird style to it, CGI mixed in with reality, so for example a huge pyramid skyscraper is CGI'd in the background of a scene looking very out of place.  Halfway through the film it turns into a brief 5 minute Anime which does look very good.  The film also flips back and forth quite a lot between the start of the apocalypse, and 5 years later.

Despite the oddness the story does get a bit cliched at times.  There is the evil biker gang (not so evil here), as well as the expected end for the slave masters.  The film ends really bizarrely, but expected for such an odd film.  An ok film, well, is better than average, just for certain tastes though!