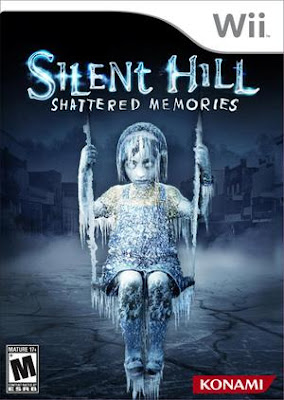 Silent Hill as I have said before is my favourite Survival Horror Series.  Shattered Memories is a remake of the excellent (but dated looking) Playstation game.  I was literally horrified learning this was being remade, in the most fan boyish way I saw it as an insult to the series.  The game is far more a re-imaging than a remake.  It features the same characters and locations, but all vastly different.

Harry Mason is travelling to the Town of Silent Hill with his daughter when his car hits a patch of ice, and crashes into a ditch.  Harry is knocked out, and when he awakes his 7 year old daughter Cheryl is nowhere to be found.  Panicking Harry runs off into the blizzard to search for her.

The game is unique in that it is all happening in the past.  Present day sees you in a Psychiatrists office.  Your tale is being recounted.  The Psychiatrist plays a huge part in the game as throughout the game you are brought back to present day in his office where he gives you Psych tests, and asks you questions about yourself.  Tests range from colouring to quizzes, while the questions can get quite personal.  The answers you give the Psychiatrist, and the way you do the tests has a direct impact on what occurs in the main story of Harry searching through Silent Hill for his daughter.  Without wanting to spoil too much one example sees a house turning up in the game the same colour as what you coloured a house in an earlier Psych test.

There is absolutely no combat in this game! I was shocked at first hearing this.  Silent Hill has always featured common people, people who aren't super soldiers.  In the past characters could use weapons, but always acted in a desperate way to convey their normalness.  In this game despite seeing what could have been used as weapons, Harry never gets in combat.  Enemies are there to run away from.  To be honest if I was in Harry's situation, I too would run from all the monsters rather than try and fight them!

The Silent Hill part of the game as usual has both normal and dark versions of Silent Hill.  The normal part sees you going to various locations through Silent Hill as you search for your daughter.  Locations all have a unique spin on them to make them fresh.  It's frustrating that I can't say too much but one example is the school.  In Silent Hill it was a primary school.  In shattered memories it is a High School so has a vastly different feeling to it.  The dark version of Silent Hill is no longer industrial in look.  Instead the whole Town literally freezes over, characters turning to ice, massive blocks of ice rising up and covering buildings. 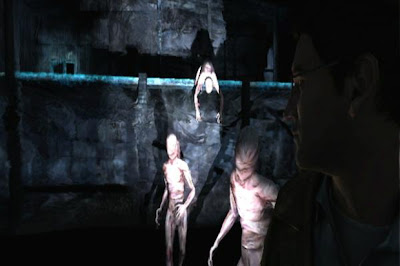 Enemies only appear in the ice version of Silent Hill.  They grab hold of you, you have to violently shake the Wiimote to get them off.  The enemies resemble small child like featureless zombies.  There is a Mirrors Edge style look to show you where you can run to.  Doors, ledges, and holes all have a blue outline round them so they stick out in the environment and you don't get lost.  The enemies are actually faster than you, Harry can pull over cabinets, and other objects to slow them down, as well as light flares which repel them.

The Wiimote is put to great effect.  As well as being used as a torch, it also functions as a phone.  Your phone can be used for lots of things.  It has a Map on it, it has a camera, as well as having the normal function of being able to ring numbers.  There are lots of signs, graffiti, and posters around the Town with Phone Numbers on.  Ringing these results in a answer every time.  You have to hold the Wiimote to your head like a phone, as the replies come through the Wiimotes crackly speaker; a very cool touch.  You get lots of texts, and voice mail during the game which add a lot of background to locations, as well as provide help with the many puzzles in the game (most quite easy, but fun to do).

I loved this game, it is a fantastic experience, unlike any Survival Horror I have played.  The story is really interesting, and deals with quite mature themes.  Sex is discussed a lot in the game, but not in a immature fashion.  From questions the Psychiatrist asks you, to voice mails it keeps being mentioned.  Date rape, prostitutes, affairs all dealt with in an adult manner.  The characters are really interesting as well.  All the ones from Silent Hill are reinvisioned here; from Cybil the Cop who helps you look for your daughter, to Laura the Nurse, all are given more real stories, and motivations.

This game is very good looking for a Wii game, and features a great soundtrack.  I really enjoyed going through this game.  Something bad about the game is it can be a bit buggy in places.  There is at least one game killing bug (luckily I missed it) as well as glitches where the sound on the Wiimote breaks until you reset the game (occurred to me once).  But it is a fantastic Silent Hill game, well worth a purchase, and better than the bland Silent Hill 5 for certain!