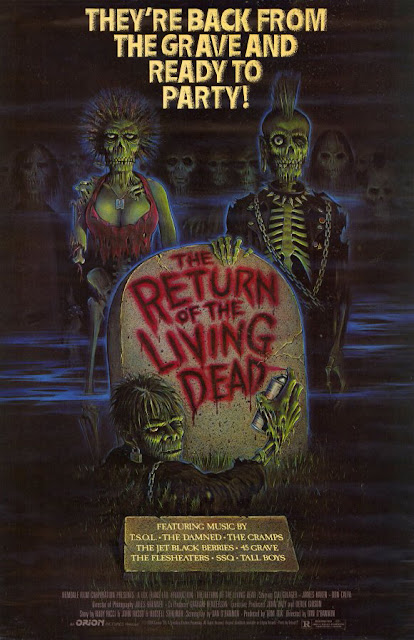 I love The Return of the Living Dead so much, though made in 1985 it still thrills me, and makes me laugh as much as it did the first time I saw it. It is a spoof sequel to Night of the Living Dead. In this film it is implied that George Romero got his idea for his film from a 'real' event that happened in Pennsylvania.

It is the 80's, time of punks. One such punk is on his first day at a job at a medical supply warehouse.  He asks his old co-worker what the strangest thing the warehouse has ever received was. The co-worker takes him to the basement and shows him these canisters. He tells the new worker that the canisters were accidentally sent to the medical warehouse by the Army. Each canister has a dead body contained within. Sure of their durability the man kicks the canister, unfortunately this releases a poisonous gas which knocks the two out. They awake to find the canister empty, heading upstairs they find the dead in their warehouse have come to life. This includes butterflies in a display case, split dogs, and a corpse which had been in the freezer. Eventually with their bosses help they chop up the zombies and take them to a nearby mortuary where they incinerate the corpses. Meanwhile the punks friends have gone to a nearby cemetery to have a party while waiting for their friend to leave work. Anyway, things start to go very pear shaped when the incinerated corpses release a toxic cloud which seeps into the graveyard reanimating all the dead there. Pretty soon there is total chaos as the dead rise, and the survivors run around screaming their heads off mostly. 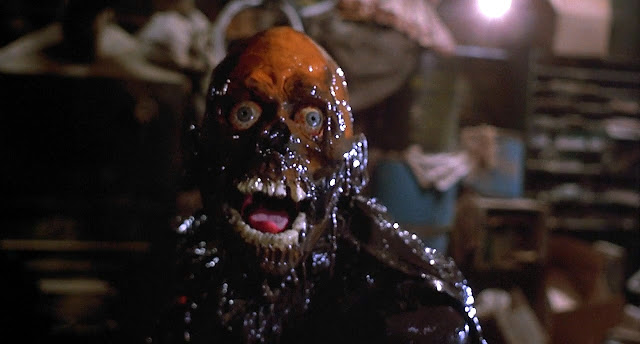 This film is really funny.  The duo of the middle aged worker, and his young punk co-worker is hilarious. Together they have the best dialogue, and are totally manic together, reminding me of two Basil Fawlty's (or John Cleese's). The other characters are mostly of a high standard. The calm mortician being a close favourite to those two.

The zombies are fantastic. Trying to kill them as seen in the George Romero film they discover the zombies are near indestructible. Destroying the brain, hacking bodies to pieces, acid, gun shots; nothing works. Even an arm on its own can cause havoc as it strangles and tears at the victims. The zombies are intelligent, can run, and can talk. One scene which the ace zombie-core band Send More Paramedics got their name from involves the zombies on an ambulance radio calling repeatedly for more paramedics. Each new batch that turn up quickly getting ripped apart by the hiding zombie hordes. The zombies crave living brains, and chant "braaains" all the time, and the recently infected humans seem to have more power and intelligence than the resurrected graveyard corpses. One such zombie chasing his girlfriend shouting "let me eat your brains!". 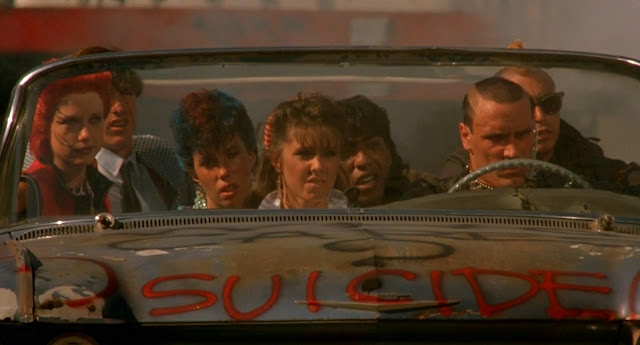 The film has a great punk soundtrack to it. Being set in a empty industrial estate, and being cordoned off means the film can really focus on the small groups of humans. They are funny in that they are mostly just totally panicking, with no idea what to do save from barricading everything they can.

The films ending is really cool, overkill, but is both effective at wrapping up the tale, as well as leaving room for a sequel (of which there are at least four pretty much unrelated further entries). The film is essential viewing for any zombie fan, and for any horror fan in general. It is a great introduction to the zombie genre.  Essential viewing!

good call! i love this too... the less than desirable sequels... which left a dead taste in my mouth...
iZombie

I quite liked Part III, have ordered 4 and 5, though have heard they are terrible!