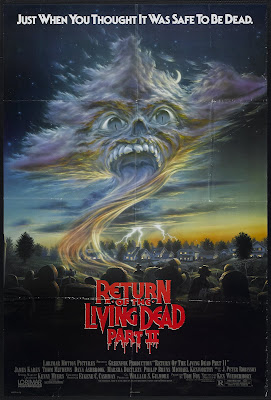 I had great memories of this film.  I remember it being hilarious.  Watching it again I discovered to my horror that it is nowhere near as good as I remembered, mostly due to far too much 'comedy' over acting.

The Army are transporting some canisters (canisters which contain the zombie virus as seen in Return of the Living Dead).  One comes loose and falls near to a graveyard in a small Town.  Pretty soon 2 young bullies accidentally release the virus gas.  It seeps into the graveyard nearby.  Pretty much soon the whole Town is under zombie invasion by brain hungry undead.  With the exits to the Town blocked by trigger happy soldiers the remaining human survivors must work together to deal with the zombie threat themselves.

A few characters reappear from the first film.  The middle aged man and his new apprentice reprise their roles, this time playing 2 grave robbers.  The Army General in charge of locating the canisters is back.  It is not ever stated if this is a sequel to the first film, or if it's a re imagining.  The reprised characters throw some cheeky references to the first film such as the punk saying something along the lines of "somehow, this feels so familiar, as if it's happened before in a dream or something".

The main problem with this film is that nearly all the characters totally over act with their panicking.  It was funny in the first film, but here it is just done too much.  Characters become irritating more than anything as they scream and shout.  One of the new characters; an eccentric Dr is awful, meaning to be an oddball, and forgetful he just comes off as annoying as Hell.  He has some funny moments, such as recognising one of the zombies as a person he wrongly diagnosed in the past, but apart from that he is just not fun. 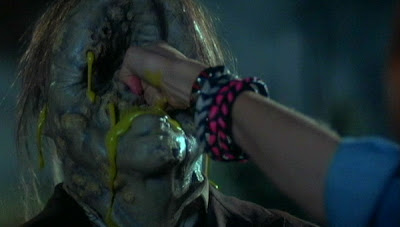 The zombies once again are able to talk, and run, but overall seem more sluggish than before.  Again there are some more intelligent zombies, such as one of the young bullies who pops up throughout the film after his victim; a McCauly Culkin lookalike who is the main character.  There is some cool zombie violence, one has it's face caved in when punched, another is shot in half, and ends up crawling after his still walking legs.  No midget zombies this time around.  The main problems with the zombies is that they are no longer invincible.  A way to properly re-kill them is discovered by the survivors reducing their threat.

The film is ok, and can be funny in places, but too many times the film tries too hard to be funny and fails.  The script is nowhere near as good as the last film, the zombies are played far too much for laughs, and the humans mostly real annoying, though does feature an actor who went on to have a big part in the excellent Twin Peaks!  This can be picked up very cheap now, just don't go in expecting a film as good as Return of the Living Dead.